Ex-Geelong star Tim Kelly said a weight had been lifted from his shoulders after he signed a long-term deal with his childhood club West Coast to return home to Perth.

The hottest prospect of this year's AFL trade period detailed the stress he and partner Caitlin had endured during two seasons at the Cattery, with two of his three young boys diagnosed with autism. 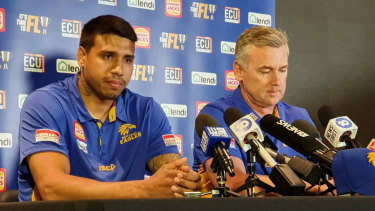 Ex-Geelong star Tim Kelly with West Coast coach Adam Simpson in Eagles colours after the clubs completed a successful trade for the 25-year-old.

After the Eagles secured the trade by sending a swag of draft picks Geelong's way, Kelly and new coach Adam Simpson said they were "rapt" the deal was completed early in trade period so they could focus on 2020.

"It's been really emotional, we know we've made the right decision … being back home, surrounded by family. I can't wait to get to work," Kelly said at West Coast headquarters on Wednesday.

Kelly said it "meant the world" to be back home in Western Australia, where he plied his trade in the WAFL for South Fremantle, overlooked in four drafts before Geelong snapped him up at the end of 2017.

"Myself and Caitlyn are pretty open with the issues we have with our sons," Kelly said.

"Two of my three boys are autistic. My oldest boy, as soon as we got to Geelong, he was basically diagnosed with that. He's non-verbal, so there's weekly speech therapy sessions, weekly occupational therapy sessions with him.

"Earlier this year we discovered one of my twin boys is also going to be going down the same path and is going to need the exact same treatment.

"The good thing is we got onto it early but, as you can imagine, to manage all that on the other side of the county where you don't have any family support, me being a full time athlete, I'm giving the Geelong footy club my all, and all my time.

"Caitlin doesn't have anyone around to assist with that. And it's pretty tough."

The two-time Geelong best and fairest runner-up, who also came fifth in this year's Brownlow Medal, said he would feel less pressure now he was an Eagle playing back home and surrounded by family.

"You can just imagine how different it would be being home, having family and that around," he said.

"One, it's less pressure on me. I can go to work day in, day out knowing Caitlin has got the support around here and I can just focus on doing what I do best."

Simpson also expressed relief the deal was done early in the trade period and said the fact there were several new dads at West Coast helped Kelly decide his preferred destination.

"What support we can offer Tim and his family, obviously at the football club, but also away from the club was part of the appeal," he said.

"I think we've got 11 or 12 players with children. We understand it's a difficult task just being a dad full stop. So any support we can give, we will."

Kelly said he still held strong feelings for Geelong and his former teammates but that there was no other option for his young family but "to just come home".

"[The family are] over the moon, they're bouncing off the walls," he said.

"For Caitlin and my parents, our extended family, especially with some of the issues we've got going on with my boys, it means the world to be home. I'm thrilled, we all are.

"There are a lot of guys on the list who share similar interests to me, have a similar lifestyle, young guys, professional athletes, dads … so yeah, I was drawn here." 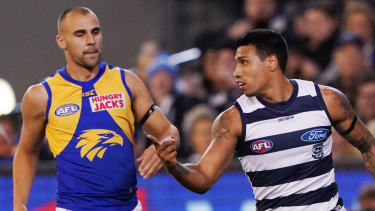 Kelly playing against West Coast in this year’s AFL semi-final at the MCG.Credit:AAP

Losing so many draft picks did not worry Simpson, who said the club had secured young draft picks in previous years to ensure its future, but keep the premiership window open.

"I think we've got some good young talent coming through. We've been able to get someone like Tim into the club and hold onto our players, which is pretty important," Simpson said.

"It strengthens our list but it doesn't guarantee anything.

"It's been stressful for everyone, Tim's had to deal with it more than anyone. I think both clubs walk away happy with what happened."

Kelly said he had been in regular contact with exiled Eagle Willie Rioli throughout the year and couldn't wait to work with his new teammates, especially star ruckman Nic Naitanui.

"I've known Willie for a long time, I played with him for about a year and a half," Kelly said.

"Our careers have gone different paths but I'm excited about being his teammate and am here for him as he goes through everything.

"Liam Ryan I played a bit of WAFL against … those guys reached out at different stages in the past year. It's great to feel welcomed in and I can't wait to get to work with these boys.

"Nic Nat is obviously a big presence in the air and what he does at ground level. Obviously he's going to be putting it where I want."

Kelly was thrilled his old club was able to get a good deal out of his trade home.

"I've loved my time there, and everyone involved. It's a great club. Unfortunately due to my circumstances I couldn't stay there any longer," he said.

"I've got a lot of texts from the boys saying well done, congrats and that they're happy for Caitlin and the kids.

"I got off the phone to Joel Selwood and we wished each other the best. We're going to miss playing with each other and going into battle."

Kelly said he grew up a mad West Coast supporter, with premiership captain Chris Judd his favourite player, but revealed he switched allegiances once the dual-Brownlow Medallist changed clubs.

"Caitlin can't wait to get all the boys their West Coast gear, she's just absolutely rapt, same as me," he said.

"It's always been a childhood dream to wear the blue and gold."

Kelly exploded onto the AFL scene with two exceptional seasons to begin his elite career.

"His first two seasons in the AFL have been quite extraordinary and probably as good as any player in recent history," Vozzo said.

Simpson refused to acknowledge Kelly had been signed on a six-year deal although the new Eagle's manager Anthony Van Der Wielen said earlier on Tuesday that was the length of his new contract.

"Tim’s had a pretty good association with West Coast for three or four years now into the time where he was drafted and the season before that," he said, adding Fremantle was never really an option for the 25-year-old.