They rarely see eye-to-eye off the field, never on the field, but Maroons captain Daly Cherry-Evans says he is open to a “gentleman’s agreement” with the Blues over the rising scourge of play-acting for penalties in the wake of the NRL’s aggressive policing of high tackles.

James Tedesco has been among the NSW players saying they want the practice out of the game and won’t be trying to earn penalties in Origin off the back of a questionable tackle or incidental contact. 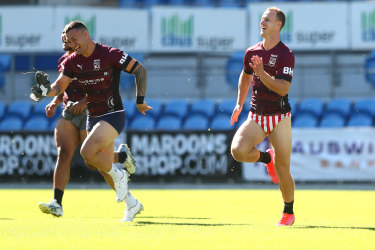 News in briefs: Daly Cherry-Evans trains in his budgy smugglers on Sunday.Credit:Getty

“That’s sportsmanship at the end of the day. But I think Origin is a different beast. We’ll see a lot of free-flowing footy and not too many people staying down.

“The product of Origin is amazing: 13 on 13, I don’t want to have to be talking about referees. That’s not fair to them. We want the product to be spoken about and the players that have played well, not what has been going on in the game.”

The Maroons travelled to Townsville on Monday afternoon where they were certain to be greeted by a city making the most of their rare Origin hosting rights. They have even set up tents and temporary accommodation to cater for the influx of fans.

They have now won 12 of the past 14 Origin fixtures on their home turf, although those have all been at Suncorp Stadium in Brisbane. That’s the home of the second match, meaning Queensland get the dream one-two punch to begin their defence of the crown.

NSW believe that puts all the pressure on Queensland and they are right to suggest that winning the Shield in enemy territory over the first two games would be a brilliant achievement. Cherry-Evans, not surprisingly, sees things differently, saying the venue simply provided them with an opportunity, not mental baggage.

“I can’t speak on behalf of everyone but I don’t see it as pressure. It’s a great opportunity to go up there and have a crowd that is going to get behind us 100 per cent,” he said.

“It’s not something that scares me… that’s great. As athletes, we don’t look at it like that, we see it as an opportunity to go up there and do something really special.”

Cherry-Evans said Dane Gagai was recovering well from a bout of tonsilitis and would suit up as per program, while injured Storm stars Harry Grant and Cameron Munster have both performed strongly at training and would be fit for Wednesday night.