Cautious Tigers to keep Cotchin out for another three weeks

Richmond are treating Trent Cotchin super cautiously, with the skipper expected to miss another three weeks with the repeat hamstring injury that has seen him absent since round three.

Cotchin hurt his hamstring in Richmond's round three loss to Greater Western Sydney and his return was set back when he re-injured the same hamstring at training. 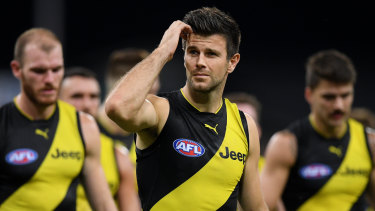 The Tigers are being very cautious with the injured Trent Cotchin.Credit:AAP

He is certain to miss the next two games – this Sunday's clash with Hawthorn and the Dreamtime game against Essendon – and is very likely the round 11 match against North Melbourne. While he could resume for round 12 against Geelong, the careful Tigers will not play him until they believe the risks of another strain are greatly reduced.

Richmond's caution with their skipper carries a recognition that a third hamstring recurrence would seriously jeopardise his 2019 season. Players who re-injure a hamstring three times are major risks to play again in that season, as evidenced by Collingwood pair Darcy Moore and Jamie Elliott last year.

Small forward Daniel Rioli will also be available after missing last week's game againt the Dockers, arguably the Tigers' best performance of 2019 in view of the personnel missing and the performance of younger players such as Shai Bolton.

Ivan Soldo is expected to come in as first ruck to replace Toby Nankervis, who will miss six to eight weeks with an adductor injury.

Richmond's first draft pick from last year, Riley Collier-Dawkins, is in the mix to make his debut, although it is unclear who the large inside midfielder would push out if the Tigers are to bring back Vlastuin, promote Soldo and regain Rioli.

Soldo has not played this season, as the Tigers have opted to use the hyper-athletic tall Noah Balta as the back-up ruck behind Nankervis, in a set-up that they recognised as more sustainable than using the now-retired Shaun Grigg as the second ruck, as they did last year and in 2017.

Richmond's injuries to key players – especially Alex Rance (knee reconstruction, likely gone for the season), Jack Riewoldt (missing until after the bye in round 14 with a knee injury) and Cotchin – has had the silver lining of forcing them to introduce younger players and build depth in the playing list. The Tigers have used 32 players thus far this season, equal second in the AFL behind North Melbourne (34).