Dan Butler was "stoked" to become a St Kilda player during trade period, but he certainly didn't enjoy the process that saw him eventually traded from the Tigers to the Saints.

Butler's trade was one of the last ones to be finalised before Wednesday night's deadline, and watching on from Bali as his future momentarily hung in the balance wasn't something the small forward would like to experience again anytime soon. 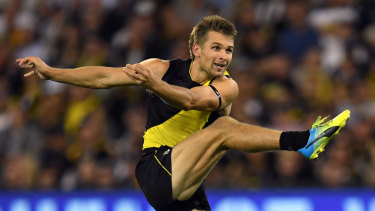 Dan Butler has made the move to the Saints.Credit:AAP

"It was pretty nerve-wracking," Butler told SEN on Tuesday.

"I got told a few days earlier that it was all good to go but until my name was officially read out I was pretty nervous because, I'm not sure, strange things can happen.

"Until I saw my name at the Saints, my heart was beating pretty fast.

"It came down to the last five minutes of the trade period so I was getting pretty nervous."

Butler explained how he was able to pose for a photo on social media with a St Kilda jumper from the Indonesian holiday island so soon after officially becoming a Saint.

"One of the boys [former Richmond teammate] Jayden Short picked one up from a Bali market for about 10 bucks I think earlier in the day and had it ready for me," Butler laughed.

Butler began contemplating a move from Richmond in the second half of the season as he fell out of favour at Punt Road, with the likes of young guns Sydney Stack and Shai Bolton cementing their spots in the senior team. He almost ended up at Carlton before settling on the Saints.

"I had a meeting with them [Carlton] as well [and] obviously got caught touring the club which wasn't great for me," he quipped. "It got close but in the end it wasn't to be."

Butler insisted Richmond had no issues with him meeting with the Blues during the season.

"I was upfront with them the whole time, they know it's a business as well and those things are going to happen so I didn't hide anything from them," he said.

The premiership forward admitted it was tough to watch the Tigers win their second flag in three years this year and not be a part of it, but he was rapt for the players who were able to taste premiership success for the first time.

"My two housemates Jayden Short and Liam Baker got to experience [a flag] for the first time and that's really what I tried to focus on rather than me getting down in the dumps," he said.

In the end, St Kilda wooed the 23-year-old over to Moorabbin.

"I had a couple of meetings with the list manager and met 'Ratts' [Saints coach Brett Ratten] as well and they were just very welcoming of me and really believed in me and my strengths as a footballer," he said.

NRL allowed to have fans in stadiums from next week