Home » Rugby League » Both Abletts should be Legends, but have we seen the last of ‘Gaz’?

Both Abletts should be Legends, but have we seen the last of ‘Gaz’?

For every footy lover, the game's sudden shutdown has left a massive hole in our lives. At the same time, it gives us a chance to reflect on why we hold the game so dear, and appreciate the players who make it great.

Given that we don't know when – or if – footy will return in 2020, it's easy to wonder whether we've seen the last of some AFL champions. One, in particular, comes to mind.

Through his more than 15 years in the game, I've talked and written a lot about the man often known as 'the Little Master', or just 'Gaz'. 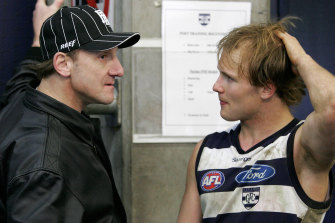 Father and son: both Abletts should end up as Legends of the game.Credit:The Age

Since making his debut in 2002, Gary Ablett Jnr has been one of the most scrutinised footballers in the country. The son of a footy legend – 'the son of god' – he was always going to carry plenty of pressure. When he first arrived on the scene, with a full head of hair and as a forward more than a midfielder, he looked a good player. At that stage, though, we had no idea just how good.

Strong leadership at Geelong challenged him to prepare better and now he's one of the most professional players going around. In the interim there have been two premierships, two Brownlow Medals and a stack of other individual awards. There's really nothing he hasn't done.

That's why Gary jnr should one day become an official AFL Legend. What's more, he should be joined in that esteemed company by his dad. What a moment that would be for footy, if father and son both reach the greatest of heights. As players, they could hardly have been more different.

Gary snr was probably the most freakish footballer we've ever seen and regularly did things others could only dream of. He was explosive and there was an edge to him, too. Gary jnr doesn't have the same explosiveness as his dad or someone like Dustin Martin, but makes up for it with incredible vision, decision-making, balance and a step that always seems to get him out of congestion and trouble.

It's true that at times I've been critical of him, asking whether he was accumulating the ball rather than really damaging the opposition, or if he wasn't always making those around him better. But it can be easy to forget just how good he was in his prime.

While his best games weren't necessarily 40-plus touches, it seemed you could always count on Ablett for a couple of goals. In his final year at Geelong before heading to Gold Coast he booted 44 goals from 24 games, while averaging 32 touches a game. In the past few years his role has evolved, and his numbers haven't been quite the same, but he's still more than handy.

But having announced the 2020 season will be his last, there's no doubt in his quieter moments Gary would be thinking about his footy mortality. There are others in the competition, such Shaun Burgoyne, or Heath Shaw, who are in the same boat. We've seen over the past few years very few players get their fairytale farewell, and some get no farewell at all. 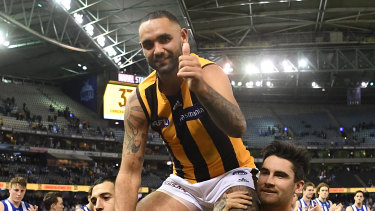 Burgoyne is chaired from the ground after breaking the Indigenous player games record. Credit:AAP

Just ask Chris Judd or Dane Swan, who both retired through injury. Make no mistake, the Little Master will be doing everything he can to ensure he gets one last crack. His reputation for putting in extra work on his own is well known. He clearly has the mental strength to get his body right and that will be important as the players face weeks or even months in relative isolation.

But the question remains, if this season is pushed into 2021 or isn't completed at all, does he want to come back? He's got a young family and I'm sure is looking forward to life after football.

Regardless, let's hope 'Gaz' gears up for one last hurrah. It would be a shame if the last time we saw him was in front of empty stands in a loss to GWS in Sydney.

Imagine just how good it would be if he got a send-off in front of Cats fans at Kardinia Park, or a packed MCG in a final. And for anyone who needs a reminder of his brilliance, now might be the perfect time to sit back and watch some highlights of arguably the greatest on-baller of the modern era. I hope one day he will be a legend in every sense.