Brendon Bolton’s future will likely be shaped over the next four Carlton games, when the Blues meet clubs that are either in their same weight division – St Kilda and the Dogs – or teams that are beatable if they’re below par in Essendon and Brisbane. 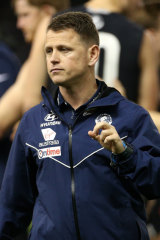 The loss to the Giants was awful, the second time in three weeks that they’ve been abject. A howler against fellow-straggler North was followed by a spirited near miss versus Collingwood, then another meek effort against a ruthless GWS, who put the clamps on Patrick Cripps (a victim of De Boer war), battered the hapless Marc Murphy (crunched by Shane Mumford) and ran the sword through the mostly baby Blues.

Commendably, the Blues have been standing by their man as the losses have piled up, but there will come a point when that unconditional support ceases. When? It will be difficult to remove the coach mid-season, as the Blues have in the past, because they have been so strong in backing Bolton. They know, too, that another sacking – chief executive Stephen Trigg was culled less than two years ago – will reinforce their image as executioners and bring external condemnation, even if the members welcome it.

Bolton’s chances of continuing in 2020 will be greatly enhanced if he can engineer a couple of wins over the next four matches, while avoiding another flogging.

If the Blues go to the bye in round 14 with three wins and without another howler, Bolton will be back in the game. But if they don’t win any of those four games and suffer a third thrashing – really, a third strike in terms of effort/desire – then his card will surely be marked, even if they stumble along to the end of the season without removing him.

The Blues don’t lack talent, they lack experienced talent. The team thrashed by the Giants had only four players with 100-plus games – Dale Thomas, Matthew Kreuzer, Ed Curnow and Murphy – plus Cripps (89 games), while 12 players had played fewer than 50 games (with Sam Petrevski-Seton on 51).

Understandably, Carlton supporters are screaming. Tired of short-cuts and recruiting band-aids, they’ve bought in this new concept of rebuilding, but the Blues have shifted from short-cuts to very deep cuts and the fans’ patience is almost exhausted.

Bolton is 75 games into a rebuild that was slated to last 66 games. This year should bring significant progress. Why aren’t they rising faster? There are various reasons. One is that in the first draft under Bolton and list manager Stephen Silvagni the Blues picked three highly talented talls in the first round: Jacob Weitering, Harry McKay and Charlie Curnow.

All three have the talent to form the basis of a spine for a decade. The problem is that talls – especially a gangling gazelle like McKay – take longer than midfielders to make an impact.

Curnow, for whatever reason, has been much worse than last year. Weitering’s development was arguably stunted by experimenting with him as a forward when he needed to be settled back.

Brisbane also picked up talls in their 2014 and 2015 drafts, but the two who have made the grade, Harris Andrews and Eric Hipwood, were academy recruits who didn’t cost much in draft terms (Josh Schache, pick No. 2, was costly). This meant that the Lions could draft three midfielders the following season who are becoming serious players: Hugh McCluggage, Jarrod Berry and Alex Witherden.

Sam Walsh, just nine games into his career, is having a greater impact on Carlton’s performance this year than any of those 2015 talls. Had they picked up two midfielders in 2015 (when Melbourne drafted Clayton Oliver), they would be far further advanced. And they haven’t landed a mature player of Lachie Neale’s standing, either.

Paddy Dow isn’t greatly advanced in his second season. Sam Petrevski-Seton hasn’t shown consistency in his third year and the decisions to trade out Bryce Gibbs and Zach Tuohy have further denuded them of experience (despite the Crows paying overs for Gibbs), albeit they gained two first rounders for Gibbs and Caleb Marchbank for Tuohy.

In the GWS slaughter, the Giants’ midfield supremacy couldn’t be countered by a threadbare defence that didn’t have Kade Simpson, Liam Jones, Lachie Plowman or Sam Docherty. Simpson, at least, should be back soon. The Blues have virtually no depth down back.

The decision to exchange first-round picks with Adelaide for Liam Stocker was risky, and the final judgement will hinge on where the teams finish, how Stocker fares and what the Blues gain from Adelaide’s pick and vice-versa. But that verdict will take a couple of years.

The Carlton board’s call on Bolton will be made much sooner.