Home » Rugby League » Big name may not be best fit for Pies in coach search: Licuria

Big name may not be best fit for Pies in coach search: Licuria 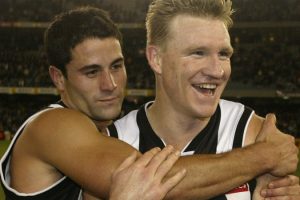 Collingwood will not necessarily target a big-name replacement for Nathan Buckley and are open to a first-timer being put in charge as the club embarks on their first in-depth process to find a new coach in decades.

Magpies football director Paul Licuria said the club did not have a preconceived idea of the type of coach it needed, whether that was an experienced hand or someone lower-profiled. 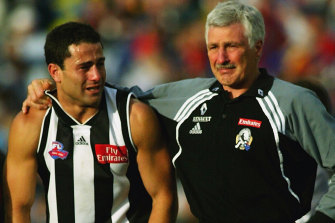 Paul Licuria and Mick Malthouse in the aftermath of the 2002 grand final, which Collingwood lost narrowly.Credit:Getty Images

“I worked with ‘Bevo’, I would love a Luke Beveridge type but it’s whoever the process brings us to, not just me saying ‘get that type of person’ or ‘get a big name’.”

Licuria said he would seek counsel from his former mentor and Collingwood’s last premiership coach Mick Malthouse about candidates and the type of coach the club should look at but it was not likely Malthouse would fill the final position on the club’s coaching selection panel.

Licuria, fellow board member Peter Murphy, CEO Mark Anderson, football manager Graham Wright and one other person yet to be named will form the panel to search for the next coach.

The last person on the panel will not be named and the group will not meet until after Buckley’s last game as coach on Monday, the traditional Queen’s Birthday clash against Melbourne which has been moved to the SCG. 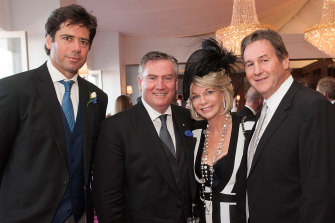 “I will be speaking to Mick for his thoughts and opinions on it. I have caught up with Mick a number of times about footy players and coaches and I tell you it is great to pick his brain and knowledge around coaching,” Licuria said.

He said the club would have spoken with another former Magpies premiership coach Leigh Matthews for his advice too, and potentially to join the panel, but that was not appropriate as Matthews is now a Brisbane Lions board member.

In a wide-ranging interview, Licuria, a former two-time best-and-fairest winner and popular club man, said he was disappointed and angry that media reports suggested he and director Peter Murphy were behind the push to get rid of Eddie McGuire and that he had “virtually begged” McGuire not to depart, calling him 15 minutes before McGuire stepped down.

He said he was still hopeful of a compromise with Jeff Browne and his camp, confident that all sides had the best interests of the club at heart.

He also said an EGM was unnecessary and unhelpful as the club had already implemented significant change since the sweeping review of the club by McGuire, Geoff Walsh and Murphy in 2017.

Licuria, who joined the board in 2018, said many people had to take ownership of the salary cap troubles the club found itself in which prompted the painful firesale of players at the end of last year but the club was also unrepentant as the problems were a result of the club chasing hard for a premiership in 2018, 2019 and 2020.

Licuria said he wanted to correct any uncertainty around Buckley’s departure, saying it was a mutual decision after long discussions.

“The beauty of Bucks and why he is an absolute gentleman is it was always what is best for the club. I cannot speak highly enough of him as a person.”

Despite the club seemingly heading to an election since Browne’s announcement he wanted to be president, and the current board unanimously rejecting his push, Licuria said there was still room for a compromise between the parties. 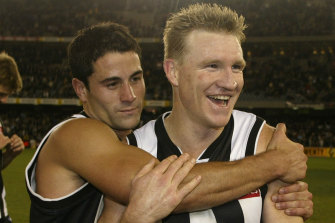 Paul Licuria and Nathan Buckley after a win in 2002.Credit:Getty Images

“We don’t want anything to get in the way of what is best for Collingwood.

“I have met with Jeff and it was just a quick meet and greet because I had never met him before.

Licuria said he had not contacted McGuire since stories emerged claiming that he and Murphy were the architects behind McGuire leaving the club.

“That story could not be further from the truth and I find it disrespectful that someone can come out and say that without knowing the facts. They are compromising friendships,” Licuria said.

“I actually rang Ed 15 minutes before the announcement. I got wind of it and I rang him and I virtually begged him not to do it. I honestly believe he still had a role to play at Collingwood.” 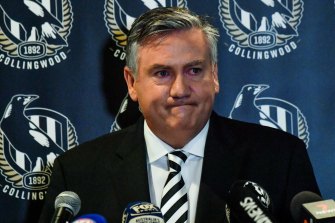 Licuria acknowledged the punctuation points of the last nine months from the damaging messiness of the trade period, the Do Better report, McGuire’s resignation, the poor on-field performance and the departure of Buckley pointing to a club drifting from crisis to crisis, but insisted it was inaccurate.

He said broken down, the issues were all different but the board functioned effectively, the club was in control and many conversations would not gain traction if the team was performing on the field.

“If the win-loss was the other way around you wouldn’t be hearing noise about challenging the board.”

Licuria said he was frustrated that media organisations with commercial interests were pushing a constant narrative of crisis at the game’s biggest club because it drove ratings, clicks and sales of newspapers and radio air time.

“What offends me is the fact that no one cares about the relationships that potentially get ruined through it,” he said.

Licuria said the club had confronted a perfect storm of circumstance with their salary cap that led to the jettisoning of players at the end of last year.

Licuria said the club had paid the price of chasing hard for a flag and coming up short.

“Without a doubt previous to 2018 [when Licuria joined the board] the guys were going hard to get ourselves in a strong position to win flags. Then we have 2018 and we are a kick and – being biased – an umpire’s decision away from winning the premiership.

“We were so close to it and then the thinking was [Dayne] Beams [returning to Collingwood from the Brisbane Lions] can add a significant amount into our football program – elite midfielder who kicks goals – and maybe that is what we need to just go that extra step.

“Now of course as we know it didn’t work out for us. But what if it had and we win a flag?”

The club had also bungled some contracts, back-ended other contracts and paid too much for players who soaked up much of their salary cap for the type of players they brought in and their output.

“I really feel for [former list manager] Ned Guy. He came in and he was immediately like ‘OK we need to move some players around here really quickly for the salary cap’ but that was at a time we had to sign up [Jordan] De Goey, [Brodie] Grundy and [Darcy] Moore.

“We needed to move some players but there was a competing tension there that we are in the window for a flag and we need to sign those players. It’s hard to get in a position to win a flag and we were in that position and we went hard to try and win one. Are we blamed for that?”