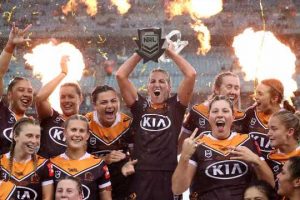 The expanded NRLW competition has been pushed back to an October start, with the six-week competition to be held as a stand-alone event and run beyond the end of the men’s NRL season.

Amid continued uncertainty around the Covid situation in NSW and with restrictions ongoing, the six-team competition had been delayed.

Most players are part-time and the prospect of moving them into a bubble to start their season was problematic.

But ARLC chief executive Andrew Abdo confirmed on Friday the competition would begin in the same week as the grand final.

It’s the first time the women‘s elite competition will be played as a stand-alone event after most matches acted as double-headers in line with the men’s finals series in the previous three seasons.

JUST IN: The #NRLW Premiership will be going ahead in October ⏰

The competition will run for six weeks with teams playing each other once before the top two sides advance to play for the premiership in a stand-alone NRLW grand final on the first weekend in November.

“We are absolutely committed to the new six-team competition being played in 2021. The worsening Covid outbreak in NSW provides additional challenges to the NRLW because most of our players also have employment and other commitments outside of rugby league,’’ Abdo said.

“We want players to have the opportunity to play NRLW without impacting their normal lives. By delaying kick-off until October it provides the best opportunity for a normal season.

“I want to thank the players, participating clubs and the RLPA for their contribution in reaching an outcome that is in the best interests of the players and the game more broadly.”