But he can't rule it out, either. 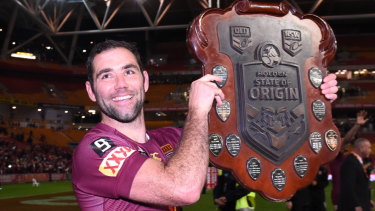 Cameron Smith was part of a golden era for the Queensland Origin team.Credit:AAP

Many Queensland commentators are still dreaming of Smith making a belated comeback to play in this year's series as the Maroons grapple with injuries to several key players and retirements of the bulk of their golden generation, who won 10 out of 11 series.

Game one of the series is June 6.

Smith has repeatedly said he doesn't intend to play after retiring from representative football but he has left a slight opening in the case of a special situation, saying "you never say never".

"I don't see it as a distraction for us," Bellamy said.

"Cameron has made it pretty clear his origin has finished but, again, there might be some persuasive people in Queensland who can change that but he made that commitment to himself and his family.

"So I'd be surprised [if he played]. He has made it pretty clear in the thousand times he has been asked about it but I might be wrong."

While it looks very unlikely Smith would commit to a whole State of Origin series considering all the time away from his family, some have wondered if he could be enticed to play if the series was tied 1-1 heading into a deciding game three.

Maroons great Allan Langer made the same sort of comeback in 2001, flying home from playing in the United Kingdom to help Queensland win the deciding game of the series.

If Smith did the same it would add another chapter to his lengthy career.