Richmond assistant coach Adam Kingsley has chosen to stick with Tigers rather than pursue the vacant Adelaide Crows coaching position.

Kingsley's decision to withdraw from the race for the Crows' coaching job leaves GWS assistant Matthew Nicks and Hawthorn assistants Scott Burns and Adem Yze among the remaining candidates to replace Don Pyke. 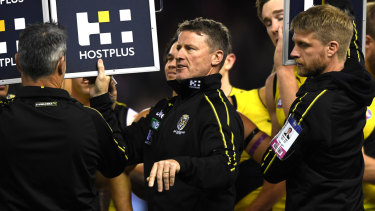 The Richmond coaching set-up this year.Credit:AAP

Kingsley, who coached Richmond's midfield in their premiership this year – his first at Tigerland – had been viewed as one of the leading candidates for the coaching position before his withdrawal.

Kingsley, who spoke to the Crows but never had an in-depth presentation, told Adelaide he wanted to develop further at Richmond and, in effect, the former St Kilda assistant and current lieutenant to Damien Hardwick has backed himself to win a senior job in future.

Yze recently signed a contract extension with the Hawks but is free to leave should be land the senior job at Adelaide. Assistant coaches almost invariably are not held to their contracts, or have get-out clauses, in the event of winning a senior position.

Kingsley was a leading candidate for the Crows position when Pyke won the job at the end of 2015 following the death of Phil Walsh during the season. He presented strongly then and was thus invited to apply again following Pyke's exit. 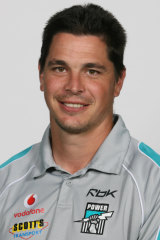 Hawthorn obviously would need to revamp their coaching panel if either Yze or Burns is appointed at the Crows. Both Burns and Nicks have South Australian backgrounds, which is arguably an asset in coaching Adelaide.