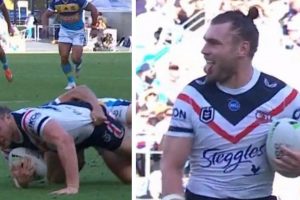 Roosters star Angus Crichton scored the second try of the match against the Gold Coast Titans on Saturday afternoon but it’s divided the NRL world for several reasons.

Firstly, it was checked — and cleared — by the Bunker as a double movement, and secondly for an act that almost made forward look very foolish.

It was 21 minutes into the game when Crichton hit a hole off a perfect short ball from Sam Walker, putting him through a gap.

Crichton was expected to make the team for Origin I but was suspended for a late hit on Brisbane’s Albert Kelly, although the door is ajar for Crichton to return to the Origin realm for game II.

Crichton was cut down however and looked to fall short but appeared to crawl to the line despite Campbell on his legs, with the question mark that it was a double movement.

“Angus, what are you doing?” Andrew Voss said on Fox League. “He’s crawled over the line. Campbell’s getting up blowing up saying ‘I tackled him’. You can’t slide over the line like a worm can you’.”

Greg Alexander’s initial reaction was “I don’t know” but said in slow motion it looked bad but he’d give it at full speed.

Voss said that while his arm did come in contact with the ground, the momentum carried him over the line, however not everyone agreed.

Was this a double movement? 👀

That was a dead set double movement. Crichton propels himself forward. Momentum may have got him there anyway, but he definitely helps himself move forward #NRLTitansRoosters

But it wasn’t the only issue the commentators and some fans had with the incident with Crichton sticking his tongue out at Campbell, before the young Titan almost stopped him from scoring.

“What about the tongue out at the fullback Angus Crichton? That’s a bit of lair play on the young fullback.

Alexander agreed, as did Corey Parker.

“A little bit? That’s a fair bit of arrogance, that’s a lot of lair play,” Parker said. “It’s a great tackle from Campbell, I don’t know if I’d be so sure on this try.”

Angus Crichton was called out for his arrogant act.Source:FOX SPORTS

But immediately after it was awarded with Alexander saying it was lucky that it wasn’t taken off Crichton.

“It would have been highly embarrassing for Angus Crichton if that was a double movement after what he did on the way to the tryline,” Alexander said.

Voss added: “That’s a very interesting piece of play, one the try, that that would get into the head of Crichton to stick the tongue out at the young fullback as he’s running towards the line. I don’t know that the Roosters coach Trent Robinson would be all that impressed with Angus in that instance. Sure we like personality but that’s an arrogance that’s isn’t necessarily welcomed by opposition fans there.”

“I did some silly things on the footy field occasionally but this was pretty arrogant,” he said. “He’s a big man, he was always going to challenge young Jayden and Jayden did a terrific job and almost embarrassed him. Lucky the video ref allowed that to be a try.”

Try or not, talk about arrogance from Crichton. Wish it wasn't a try just to make him look like a fool. #NRLTitansRoosters

Geez Angus is lucky he scored. I reckon Robbo will give him a glare at halftime for this.#NRLTitansRoosterspic.twitter.com/qSlTXsvKBu

Crichton chucking some personality into his try scoring shouldn't be condemned, adds to the entertainment spectacle. Blows my mind that Vossy et al in commentator are so salty about it. Good fun is all it is#NRLTitansRoosters

The Roosters were well ahead at the halftime break however, leading 18-4, although the Titans finished with some momentum after a late try to Jamal Fogarty.