Home » Rugby League » And on the sixth day, Eddie had his say

And on the sixth day, Eddie had his say

Having kept silent while the list manager, football manager, chief executive and then coach explained the controversial strategy which has surprised and angered many fans, McGuire had his say on his radio show on Tuesday, adding that the club had not been in danger of breaching the salary cap.

"Nuance is everything. We could have gone on with the salary cap, so it wasn't as if it was a fire sale," McGuire said. 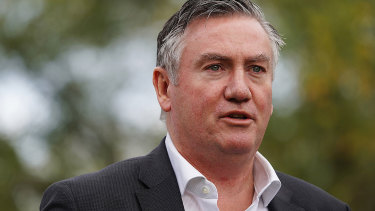 The salary dump was about repositioning the salary cap for the future and to prepare for both a likely further cut to the salary cap and to be in the market for free agents, he said.

Collingwood have been priced out of the best free agents in recent years because their cap has been at capacity as they loaded up in an attempt to win a flag.

Having come close to a premiership two years ago and then being belted out of the second week of finals this year, the plan was to cut a few high-priced players who could be covered on the field while bringing in early draftees to reshape the playing list and salary cap.

Collingwood have struggled to convey their message to their fans about their trade approach. An online petition calling for answers from the club has drawn more than 1100 signatures.

"We changed, we pivoted, and we're looking ahead. And at any stage … 10, 15 per cent salary cap is going to come off, any day, and I'm led to believe that once upon a time it looked like it might be across the board, now it might be handed to the clubs [to make their own decisions on a player-by-player basis] and say 'well, go your hardest,'" McGuire said on Triple M.

"Now that's going to be nice and tasty, when everyone has to renegotiate every contract in the place in the next five minutes. So there's going to be a bit more stories on all these types of things."

The major trade moves led to more than $2 million being freed up from Collingwood's salary cap next year before taking into account the settlement for Dayne Beams and the retirements of Ben Reid and Travis Varcoe.

Mason Cox, who activated another year on his contract, is expected to sign an extension on revised terms. There is also uncertainty over the playing future of Tom Langdon after two seasons ruined by a persistent knee injury.

"You look at it from a helicopter view. Probably if there's a criticism of what Collingwood did with its players in recent times, it's being too good, too looking after [them] as far as the salary cap is concerned … And the players have been sensational, back-ending to make it happen because there was a window of opportunity," McGuire said.

"Every club does that, when you're in that window of opportunity, try and get there.

"Holistically in AFL football, if the lists come back, and the salary cap comes back a bit as well, there's going to be far more of this [what happened at Collingwood this trade period].

"The players and players association have set up that they want to have free agency – we've seen this year apart from Collingwood where players were taken out of the club – every player has walked on the club," he said. "It's all been one-way.

"What I'm saying is there will be, I think, a reckoning in the next few years because of what's going on.

"The salary cap instead of always going forward, where you could actually pitch yourself three, five years forward based on TV rights money, etc, is going to come back the other way because we haven't had any crowds. It's going to be tough in the corporate world, TV's not going to pay as much as it once did, it's going to tighten up again."