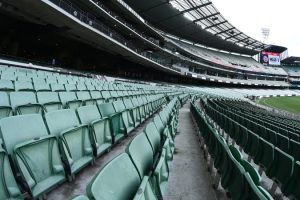 The Victorian government will exhaust all options before giving up on the AFL grand final for a second consecutive year to ensure the showpiece match is returned to its traditional home at the MCG.

Last year’s decider between Richmond and Geelong was played at the Gabba after the AFL shifted the bulk of the competition to Queensland to save the season. As compensation, an extra year was added to the MCG’s contract as grand final host. 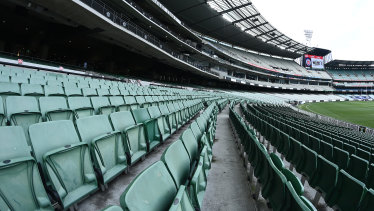 The state government and the AFL’s position remains that the league is contracted to play the match, which remains more than two months away, in Melbourne and it is too early to know what crowd limits might be in place for the game as the COVID situation remains fluid across the country.

Both the MCG and Marvel Stadium are working on updating their COVID-safe plans to submit to the Victorian government when the latest outbreak settles. The Department of Health, and then members of a government executive team, must approve those plans before crowds could return to sporting events held at the venues.

The MCG is hosting games without crowds at the moment, however AFL CEO Gillon McLachlan told 3AW in June a grand final needed to be played in front of spectators.

“No, I don’t want to play a grand final without a crowd – I don’t think anyone wants that,” McLachlan said.

WA Premier Mark McGowan made it clear on Thursday that his government would be keen to host the grand final at Optus Stadium if the MCG was unable to host crowds, and said WA could also host teams in hubs although the AFL remains keen to avoid them.

“Last year’s experience gives them lots of understanding of what states have to do,” McGowan said.

“Obviously Melbourne is going through a difficult time. I don’t want to … be seen to be trying to take advantage of Melbourne’s dire circumstances, but we’ll continue to have conversations with the AFL to make sure that the competition can continue.

“But if it comes here, it will be done in an extremely safe way, so we wouldn’t take any risks.”

Where and when finals are played during the first three weeks of the AFL finals series is more likely to be determined on a week-to-week basis, however, than relocating finalists to hubs to play games in Victoria or Western Australia during September.

Sources at the AFL said it was impossible to put such plans into place five weeks out from the start of finals as the Delta strain of COVID forces state governments into making quick decisions that can rapidly impact their ability to host games, as was seen in South Australia this week. 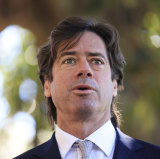 It means the AFL’s discussions with governments are now centred around providing them with the flexibility to consider the options available, where crowds were allowed, and what impact the decision will have on the integrity of the competition, before they made calls on where and when each final was played.

At the moment, there is a club from each of the five states in the top eight.

The league is working with all state governments and venue operators to develop contingency plans that give them as much flexibility as possible to move teams across borders in what the AFL calls ‘sterile corridors’.

At the moment Sydney, the Giants and Essendon are based in Queensland with the families of players from the two NSW-based clubs flying on Thursday to a quarantine hub. They will spend the next 14 days under strict quarantine conditions in hotels before being allowed to reconnect with their loved ones.

St Kilda is also staying in quarantine in Joondalup ahead of their match against the Eagles, with Saints ruckman Rowan Marshall, as well as several Giants and Swans players, isolating for 14 days after being at tier one exposure sites in Melbourne last week.

Although clubs could relocate to secure hubs for the finals to ensure they are not exposed to the virus and travel around the country in sterile corridors, the league is attempting to minimise the huge cost to the competition of accommodating clubs for extended periods.