Home » Rugby League » AFLW finals would be a bonus for Geelong: Cook

AFLW finals would be a bonus for Geelong: Cook

Geelong's AFLW team will exceed the expectations of the Cats' board and executive if they defeat Greater Western Sydney in Canberra on Friday night to guarantee a spot in the AFLW's preliminary finals.

Geelong CEO Brian Cook said a win would be a bonus for the club which set modest goals for the team at the start of the season. 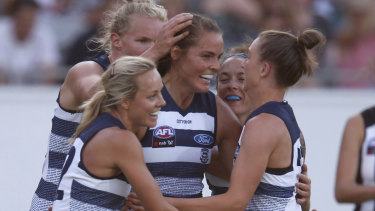 He said the club hoped to win a few games and set up a supporter base in their first season with the basis of the plan being three 'Ps' – popularity then premierships then profits.

Now, however, with the Cats playing in the weaker conference B, they are only one win away from playing in a preliminary final in their first season.

"It would be a great achievement to make the AFLW finals," Geelong CEO Brian Cook said.

"The players, to their credit, had higher hopes, and I took my hat off to them for having that energy and ambition."

The Cats opened the season with a win against Collingwood and have not lost a game to teams in their conference, beating Carlton and the Brisbane Lions despite losing No.1 draft pick Nina Morrison after round one when she suffered an ACL injury at training.

Geelong will complete a clean sweep of wins against teams in their conference if they can beat the Giants, who have won one game this season.

The Cats lost to Adelaide and Fremantle, who are both potential preliminary final opponents if Geelong win their way through to the finals.

Cook said the Cats were keen to invest in their AFLW program as they saw the benefits having a women's team brought to the club.