The AFL will hear the Queensland government's grand final pitch on Tuesday as an increase in COVID-19 cases in the Sunshine State created more uncertainty for the league ahead of its decision on where to play the season decider.

On Saturday, as a result of nine new cases, the premier Annastacia Palaszczuk reduced gatherings in private homes and public spaces that weren't COVID compliant to 10 in Brisbane, although the Lions were still expecting to host 15,000 spectators at their match against St Kilda. 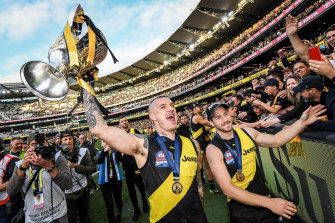 The Queensland government's presentation, which the chairman and CEO of both Queensland-based AFL clubs have helped develop, will focus on the long-term boost the game will gain from playing the decider in Queensland, as well as the planning advantages created by the strong relationship between the government and the AFL.

By the end of the month, 15 of the 18 AFL clubs will be based in Queensland with Port Adelaide the only likely finalist outside the state in September. However, the Queensland bid was not expected to object to finals other than the grand final being played outside the state.

Sources also said the Victorian government was more supportive of the grand final moving from the MCG – which holds the contract to host it until 2057 – to Queensland's Gabba than to NSW, with the state government indicating talks involving the AFL and the MCG did not favour moving the match to ANZ Stadium.

The state government and the MCG are yet to officially relinquish the game, however, they are expected to soon, with the commitment to play the grand final at the Victorian venue expected to extend to 2058.

It is unclear what financial commitment the Queensland government will be prepared to make. Those close to the bid suspect they will be more likely to make future political commitments to support the growth of the game and infrastructure than merely write a cheque to buy the event.

While there is little doubt the Western Australia pitch to the AFL will, in the short-term, be more financially attractive to the league than Queensland's bid, the quarantine restrictions for visitors make the logistics of getting teams in and out of the state more difficult.

WA premier Mark McGowan said during the week the government would consider allowing 60,000 people to attend Optus Stadium on October 24 but will not move to ease restrictions until then, meaning the capacity crowd for finals and potentially the grand final will remain at 30,000.

The South Australian government have not involved the South Australian AFL clubs in their bid, leading to speculation their pitch will be based on a financial commitment, the capacity for clubs to fly in and out of the state and the suitability of Adelaide Oval, which can currently house 25,000 spectators.

The chances of NSW hosting the grand final are considered long with Lions CEO Greg Swann telling 3AW he was "reasonably" confident in the state's bid however they would "wait like everyone else to see what the decision was".