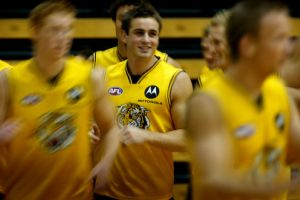 Former Richmond footballer Ty Zantuck is seeking documents and footage from the AFL as part of his injury case against the Richmond Football Club.

The Age last month revealed Zantuck was pushing to have his physical injury case extended to include a range of neurological disorders and several suicide attempts he claims are related to the concussions and head knocks he had on the football field while playing 68 matches for the Tigers between 2000 and 2004. 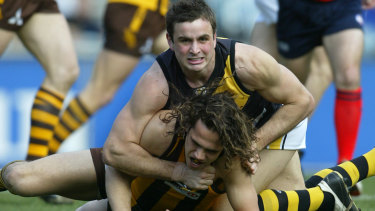 Richmond’s Ty Zantuck in a clash with Hawthorn’s Mark Williams in round 21, 2004.Credit:Sebastian Costanzo

Zantuck, who also played a further nine games at AFL level with Essendon in 2005, is suing the Tigers and club doctor Greg Hickey, former club doctor Chris Bradshaw, and another doctor, Vincent Healey, in the Victorian Supreme Court. The Tigers and doctors deny the original orthopaedic claims.

Late last month, Zantuck’s lawyer Greg Griffin issued a notice of discovery against the Tigers and the doctors. Griffin this month has issued a subpoena to five parties – the AFL, the Seven Network, surgeon and associate professor Alfred Nastri (who conducted surgery on Zantuck), Tom Gastin from the AFL Doctors Association, and the National Health and Medical Research Council.

The AFL has been asked to provide all records it has from Richmond detailing concussions any Tiger had through that same period. Griffin also wants all copies of the AFL regulations from 2000 to 2004. The AFL was contacted for comment.

The AFL has also been asked to hand over any “records relating to any process the AFL commenced or participated in to advocate for the rescission of the National Health and Medical Research Council (NHMRC) publications, Football Injuries of the Head and Neck published in 1994, and Head and Neck Injuries in Football: Guidelines for prevention and management published in 1995, including all materials relevant to how the AFL promoted to the constituent AFL clubs in the period from 1995 to 2004”.

Griffin also wants all submissions to the NHMRC, relating to the NHMRC publications, by Dr Paul McCrory on behalf of the AFL.

McCrory, a neurologist who was once closely aligned to the league, has played down the impacts of repeated head knocks, including questioning research that found a link between repetitive head injury and neurodegenerative disease.

Griffin has also sought all records of “meetings between Dr McCrory and any person working for the AFL, including telephone notes, emails and facsimiles to Ian Denley, Health Advisory Section NHMRC, Florence Adofo-Kissi and Mrs Cathy Clutton, Acting Executive Director of Centre for Health Advice, Policy and Ethics”.

Nastri has been told to provide details on how long he advised Zantuck to avoid training or playing after surgery.

Gaston, of the AFL Doctors Association, has been asked to provide the guidelines for the management of concussion from 1983 to 2004.

Griffin’s bid to amend the original statement of claim and seek an extension of time had been due to be held on Wednesday. But Griffin said on Friday it had been adjourned for argument in February.

The Supreme Court said mediation between the Tigers and Zantuck has been slated for March 25. If that fails, a trial has been set for August 1.

Zantuck alleges the Tigers were negligent and breached their duty of care in the treatment of a back injury that he claims left him permanently injured, depressed, and prompted him to attempt suicide. The Tigers and the three doctors have all denied the original orthopaedic claims made by Zantuck, who claims the back injury, the fallout from it, and the impact of the epidural injections left him medically unfit to train and play AFL football.

Griffin and his team have already analysed footage of many of Zantuck’s matches, alleging the serious knocks they believe he had in round 21, 2002, round one, 2003, and round 12, 2003 have contributed to what they claim is his mental deterioration.

In summary, it is claimed he suffers severe back and neck pain, chronic pain syndrome, major depressive disorder “with co-morbid anxiety and a history of suicide attempts”, post-traumatic stress disorder, and a range of neurological disorders.

Zantuck says he suffered back spasms, was diagnosed with a slipped disc, and was injected with local anaesthetic. He claims he had between 15 and 20 epidural injections during the 2003 and 2004 seasons.

Griffin is also acting for the wife of Shane Tuck, the former Tiger whose death is the subject of a coronial inquiry. Tuck, also a former boxer, took his own life in July 2020 and was found to have severe CTE when his brain was examined by the Australian Sports Brain Bank.

Tigers’ chief executive Brendon Gale has defended the medical care Tuck received during his 10 years as a senior player at the club between 2004-2013.