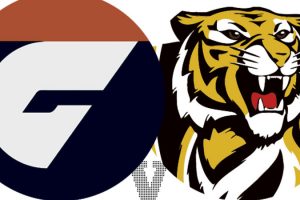 ‘We don’t want to rent one’: Tasmanian Premier lashes AFL over stalled team

Colin Carter’s report on Tasmania’s bid for an AFL team has found a strong case for inclusion in the AFL, but said a relocated Victorian team or a joint venture with a Victorian club should be considered before a 19th licence, to the anger of the Tasmanian government who do not want “to rent” an AFL side.

The report outlined three options – a standalone team, a relocated team and a team playing most of its home games – “a joint venture” – in Tasmania, with AFL chief executive Gillon McLachlan saying on Friday that while the Tasmanian case was strong, a pathway into the league was “less clear-cut”.

With no Toby Greene tonight due to suspension, it looks like guys like Josh Kelly and Tim Taranto (below) will have to have big games to beat Richmond.

A couple of late changes for tonight’s big game between the Giants and Tigers.

Hello, thanks for tuning in

Damien Ractliffe here to bring you all the action.

First bounce is at 7.50pm and there’s a spot in the top eight up for grabs between the Giants and Tigers.

the number of changes: “It’s always hard [dropping players]. A number of those young lads played some really good footy. Clearly bringing Kelly and Hopper and those guys back in was always going to happen.”

covering the loss of Toby Greene: “Clearly you just can’t cover him one-for-one. Hogan comes into the team, Himmelberg’s had a good year. Collectively the five or six down there need to pick up the slack.”

Sam Taylor’s great form: “He plays his 50th game, Sammy. He’s an important player for us. He’s a flexible player, he can play on talls and smalls. Last week was last week, he now needs to move onto this week.”

David Astbury’s late omission: “He’s got a bit of a quad cork that we thought was OK but he’s pulled up a bit sore today.

how he’s feeling chasing the pack: “It’s a little bit different … this year we’re chasing to try and get into finals. We’ve just got to worry about the process at hand and what we can control.”

last week had a Richmond look: “We had a relatively inexperienced forward half line with some of those young guys. We just lost our structure [early]. We had a real focus on [cutting off uncontested marks] at quarter-time but didn’t get a result, but at half-time we put some more experienced players across that line and got a better result. We were pleased.”

being scored against at stoppage: “There have been some things structurally we haven’t done quite as well as we would have liked. Sides have got better in that part of the game. Our turnover game is still a really strong indicator for us. We’ve got a really strong focus on stopping [scores from stoppage] part of the game tonight.”

on Marvel Stadium: “The deck is in very good nick. There’s a lot of orange around which is probably not to our strong suit but it’s good to be playing.”