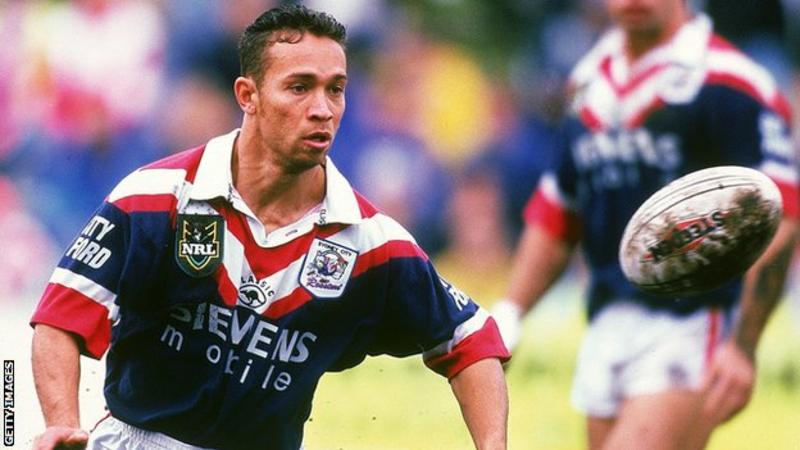 From digging wartime bullets out of the garden of his Papua New Guinea home as a child, to winning State of Origins, meeting Arthur Beetson and lifting the Challenge Cup. It has been some journey for Wigan Warriors head coach Adrian Lam.

The 49-year-old has played at the highest level, but his pathway to the top has been just as interesting as the highs that greeted him at the summit.

Lam sat down with the BBC 5 Live Rugby League podcast to reminisce over some of the moments that stand out from an illustrious career.

‘I carry his spirit with me’ – tragedy mixed with joy

It was in the garden of his childhood home that Lam dug those bullets, a legacy of Rabaul’s past as a German and Japanese enclave during World War Two.

However, his time in Papua New Guinea was cut short when the family took up residency in Australia.

Education was the reason Lam’s family opted to leave for the city of Brisbane, but it was more the pigskin than pencil and paper that came to be his tools of learning.

Having already been instilled with a love for league in footy-mad PNG, Lam and his brothers started playing junior rugby league at Wests Mitchelton before progressing to the senior side Wests Panthers.

It was there that the 49-year-old would made his breakthrough into rugby league, in the Queensland competition. But his first taste of the limelight was mixed with sadness.

Adrian Lam: “I remember the coach coming to me at the start of the week and saying: ‘You’ve a chance of playing’. It depended if Craig Little, who was the five-eighth [stand-off] and a schoolteacher, doesn’t get back from school camp. He said: ‘If he doesn’t we’ll start you but if he gets back in time, you’ll be on bench.’

“I remember him turning up on captains run the day before and I thought ‘Oh no, I’m not going to start’. We did the run and then the next day played Redcliffe Dolphins and Craig Little started at five-eighth, there was 30 minutes to go in the second half and I thought ‘How am I going to get on here? Someone needs to get injured’.

“Craig carries the ball out of dummy half, runs between two players and gets sandwiched. He’s laying on the field so they call me up to go on, I’m making my debut and I’m so excited.

“As I go on I remember seeing him, he was in a deep snore, he was clinically dead on the field so that was how my debut came about. From that moment on I’ve carried that memory and spirit through with me.

“We went back to have dinner at the club afterwards and we were notified he had died. The club was devastated. It was hard to get your head around but from that moment onwards my life changed. I felt I’d always have him with me.”

Within a couple of years of his reserve-grade debut for the Brisbane-based Panthers, the boy from Rabaul was starting to impress.

Wests went to their first Grand Final in 21 years, then backed it up with two more, winning back-to-back premierships. Lam was a star half-back within the side, and had sent letters and a video tape of his talents to every club in the then ‘Sydney premiership’ – confusingly called the Australian Rugby League.

Illawarra Steelers responded, impressed by what they saw. But before the move could come about the Steelers backed out, signing Troy Hodges instead. However, fate was to intervene, bringing Lam to what proved to be his spiritual home.

It all involved Sydney Roosters and Queensland legend Arthur Beetson, a skilful mountain of a man as a player and one of the sport’s all-time greats.

Lam: “My manager Sam Ayoub spoke to the Sydney Roosters, and the coach there was the guy who coached me in the under-19s, Mark Murray. Their half-back Brian Smith [former Australia rugby union player] was going to retire. There might be an opportunity for me.

“He said: ‘This weekend when you play the state league semi-final you need to play well because Arthur Beetson is going to be there to watch you play’. So I thought: ‘Wow, here we go’.

“To cut a long story short, I ran down the short-side in this game and dummied to my full-back, and their five-eighth stuck his elbow out and knocked my full-back over, who was my best mate.

“The game stopped, they called an ambulance, it came to the ground, they put him in and it took off and we started off again. Five minutes later I again ran down the short-side, put a grubber kick through and the same five-eighth stuck his elbow out again and knocked me out.

“So they had to call the ambulance back. I remember waking up in the back of this ambulance, only 12 minutes had gone in the game, my best mate was laying beside me and I thought ‘What am I doing here? I can’t believe it’.

“I looked to the end of the ambulance where the two doors were wide open and my mum and dad were stood there at one side and on the other there was Arthur Beetson.

“He reached in and said to me: ‘I only watched you for 12 minutes, but I’m really happy with you. I want you to come to the Roosters’. That was how it all began.”

The pinnacle of an Australian’s rugby league career is possibly split between pulling on the green and gold of a Kangaroos jersey, or – for those in the two league hot-spots of Australia – representing their state in the world-famous State of Origin series.

Lam’s selection was a proud moment, testimony to his talent, and an honour to add to his Papua New Guinea international recognition.

It also came at a turbulent time for rugby league in Australia. The game’s clubs had been split by the introduction of the Super League to rival the traditional ARL.

Origin remained under the ARL banner, and thus only players from clubs still loyal to the league were eligible. New South Wales had heavyweights such as Newcastle Knights and Manly Sea Eagles to draw players from.

Many of Queensland’s most prominent stars were in the Super League, such as Brisbane’s Alfie Langer. It would be a new-look team for 1995.

Lam: “In those days they used to name the team at 8.30 at night on Channel 9. It was a massive announcement.

“The day before we played the South Queensland Crushers, Queensland coach Paul ‘Fatty’ Vautin was at the ground, he got me walking out of the tunnel and said: ‘Adrian, you need to play well here, just trust me.’ I’d never met him and he was saying this clear to me.

“I got man of the match that day. We all tuned in for the team and when they used to name the side, they’d say the club first and then the player. So when they said ‘number 7, Sydney Roosters…’ – I knew I was in.

“The house went mad, the phone rang red hot for three hours, everyone was so excited, I was so excited, I remember laying down on the bed that night, staring up at the ceiling and thinking: ‘How am I going to do this?’

“It was a pretty special moment, I still get emotional at it all.”

With a considerable list of absentees, Queensland were much unfancied. Names such as Lam, Manly’s Danny Moore, Penrith’s Matt Sing and Chargers teenager Ben Ikin came into Vautin’s squad.

Without the likes of Langer, Mal Meninga, Kevin Walters and Steve Renouf, the series looked to have initially lacked appeal.

Lam and company turned everything on its head, with the Papua New Guinean taking man of the match in a climactic game three.

Lam: “Chris ‘Choppy’ Close was the manager and he told us in camp that Queensland supporters haven’t bought game three tickets because there were no Super League players, no Broncos players involved.

“We knew there was a game one in Sydney, game two in Melbourne and then game three at Lang Park in Brisbane. We made a pact that for them to buy those tickets, we had to win one of those games to give us a chance of winning the series.

“First game in Sydney we won 2-0, the first tryless State of Origin game ever, it made game three, because we then won in Melbourne and then in Brisbane in front 40,000 and we won the series 3-0.”

Lam went full circle when he returned to Wigan as a head coach last year and remained in post after Shaun Edwards opted against taking on the role for 2020 onwards.

His first stint at Wigan was as a player in the early part of the new millennium, where he, Julian O’Neill and Dave Furner added a bit of southern hemisphere gold dust to the domestic talent of Kris Radlinski, Gary Connolly and Andy Farrell.

Lam: “I love the Wigan people. I lost the 2000 NRL Grand Final with the Roosters against the Brisbane Broncos, then moved to come over here and lost a Super League Grand Final in 2001. I went back-to-back in losing grand finals, one in each hemisphere.

“I played in the winning team at Murrayfield [in the 2002 Challenge Cup final] as Wembley was being rebuilt, and [Wigan teammate] Kris Radlinski stole the Lance Todd off me that day. I think he had a broken toenail or something, some ‘injury’.

“But, in all seriousness, it was one of the highlights of my life. It was a big part of why I wanted to come over, playing in games like that one.”