Josh Addo-Carr was made a promise when he signed with the Storm that he liked the sound of: the club was about family first. It's why he is giving serious consideration to walking away from the final two years of his contract there.

Sources who know Addo-Carr well say he is at a point where he wants to put family before everything else. If you think it sounds like the situation that Latrell Mitchell is facing on the family front, you are right. Mitchell is expecting his second child. Addo-Carr has had a change in his personal life. 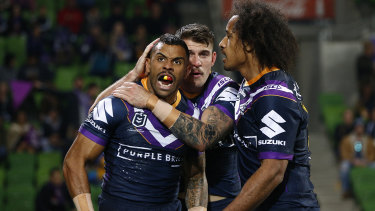 Josh Addo-Carr has told Storm he is staying.Credit:Getty Images

Without going into the details, Addo-Carr recently got custody of his five-year-old daughter. His partner, who is from Sydney, is pregnant. The pair have no family in Melbourne. His family is from Sydney and he is determined to bring his kids up around family.

The Storm sat down with Addo-Carr and his agent, Chris Orr, in Sydney on Friday.

"They confirmed their position around his contract and their desire for him to stay and extend,'' Orr said. "Josh spoke openly about his feelings on a number of things. He is not due back [at club training] until the middle of December."

Did they talk about Addo-Carr's family situation? "He certainly spoke about his family and feelings around that," Orr said.

The Storm went public to try and shut the story down, using quite emotive language, something we don't associate with the club.

"Where the talk is coming from, I'm not sure, but I can say hand on heart Josh is committed to Storm as much as we're committed to Josh," chief executive Dave Donaghy said.

Addo Carr is not committed to the club. He is committed to his family. He doesn't have a deal in place to move on.

While there are denials, the Tigers could be home once again. The Tigers have said they are not chasing him, because he is contracted to the Storm.

Addo-Carr clearly wants a change. Should he be given that opportunity, Sydney clubs will start looking at how they can fit him in. He is also good friends with Mitchell. It's difficult to know if any club could snare the pair.

Mitchell has seen his reputation trashed by critics and former greats, but he believes his ability will see him through and he will land a good deal with another club. The thing that has irked him is that he feels he was used up by the Cowboys. Mitchell's tour of Townsville resulted in a request from Valentine Holmes to be released by the New York Jets in the NFL. That didn't go unnoticed. The Cowboys say their interest was genuine.

The Sharks were the first to learn Mitchell's proposed deal with Wests Tigers was going south. They received a feeler from the Tigers to see if they were interested in letting Matt Moylan go.

If Canberra coach Ricky Stuart saw the car he'd be forgiven if he rear-ended it. In fairness, Stuart has done all the right things since that dud call: he has checked on the welfare of Cummins and resisted every offer to put the boot into the refs. 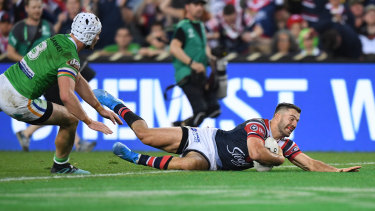 James Tedesco goes over for the premiership-winning try, just one of his many accolades this season.Credit:AAP

"I would like to see that," John Tedesco said on Twitter. "An Integrity Unit that was able to act without fear or favour."

He clearly thinks his son's dispute should be looked at, but the NRL will not comment and is showing no interest in the matter.

The Roosters knew just how bitter the fallout was with Moses and Tedesco, and felt they had to get involved. It was a smart move. They set up a trust account to deal with the dispute. It shows how well run the Roosters are, and how much they value Tedesco.

Moses' management fees are sitting in that account, amounting to about $25,000.

Tedesco has nothing to do with Moses, instead siding with Moses' business partner Joe Wehbe. Wehbe and Moses are in court, and their business is set to be split after the matter settles.

While the dispute has swirled in the background, Tedesco has reached new heights. His mental strength is incredible.

Peter V'landys takes the reins of his first regular Australian Rugby League Commission meeting during the week, but he has already instilled fear in the ranks of the NRL. There is an overwhelming view at NRL central that there are going to be changes under V'landys. And no one wants to be included in those changes. So, when he ordered there be no leaking of the proposed rule changes for 2020, the game's administrators fell strangely silent. Even after coaches were tipped off this week that there would be changes to the points allocated for drawn and golden-point games, no details emerged.
It's early days, but a culture of fear is permeating NRL central. 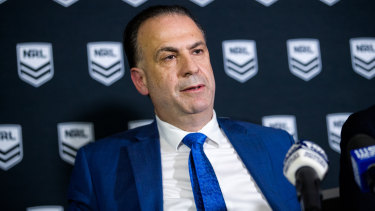 Peter V’landys has outlined his vision for the game, and has already instilled fear in the ranks of the NRL.Credit:Edwina Pickles

When V'landys took over as chairman, other board members told him he had to focus on the big picture and concentrate on policy. So you would think he would leave a couple of minor rule changes to the football department. But he seems determined to run the proposed new rules past the commission this week and "own" them as he seeks to put his personal stamp on the game.

It is a high-risk strategy because many rules, like the stripping rule this year, are quickly seized on by coaches and fans when something goes wrong. And V'landys will be the one in the firing line.

The racing boss's other big decision this week is whether to approve more than $1 million in bonuses to the NRL's top brass.

NRL boss Todd Greenberg and his team will argue that they exceeded their goals by about $10million, thanks to a favourable Origin series, so they are entitled to share in the profits. But 2019 was also a season where refereeing was terrible, culminating in a grand final controversy that ruined the game's biggest day.

Television ratings were also down for the premiership and Origin series; crowds fell despite the benefit of the new Bankwest Stadium and the inflated attendances for Magic Round; the match review committee bamboozled fans with some rulings and the integrity unit is struggling to make a decision.
V'landys has to decide if that standard merits rewarding his management team with $1million in bonuses. His decision will send a message to executives and fans. 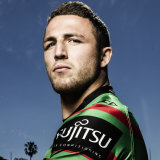 Sam Burgess called time on his NRL career after the 2019 season.Credit:Nic Walker

The Rabbitohs are bristling at suggestions they are manoeuvring to avoid paying out Sam Burgess' contract after the NRL finally determines how his premature retirement will be handled. Burgess has heard the rumours. Souths say he will be paid; they are just working on how.

Cooper Cronk received significant publicity for signing with GWS, but he has been quietly going about his work for the Roosters.

Cronk had his first conversation with new recruit Kyle Flanagan before the team jetted off to the US. Flanagan is delighted to be working with his boyhood hero.

"It's amazing how life works out … to get to work with my idol.'' Flanagan said. And to take his place?