Star Warriors recruit Addin Fonua-Blake could be sidelined for two months after suffering a knee injury on Sunday night against the Roosters.

Fonua-Blake hobbled off the field just 10 minutes into the game with the injury, which the club has now discovered is worse than originally thought. 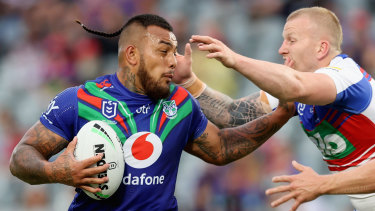 Addin Fonua-Blake will be sitting on the sidelines for a big portion of the 2021 season.Credit:Getty

Fonua-Blake is the latest in a long line of injury blows for the club this year. The Warriors will be without Peta Hiku until about round seven after the veteran picked up a knee injury against the Raiders in round three.

Jamayne Taunoa-Brown is still suspended after being banned for a crusher tackle in round two.

The Warriors are not the only club facing a significant injury toll early in the season with the Roosters, Sharks and Raiders facing similar woes.

Knights coach Adam O’Brien said he would struggle to put a roster together this week following a disastrous round-four clash against the Dragons on Sunday, which Tex Hoy, Mitchell Pearce and Kurt Mann failed to finish.

Dragons captain Ben Hunt, who played 71 minutes with a broken leg in round three, has slammed the NRL in recent days, believing the rule changes have played a major part in the injury onslaught.