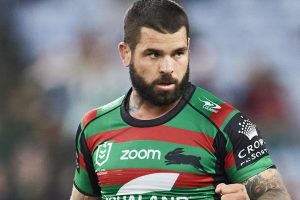 Adam Reynolds is reportedly set to sign with Cronulla as the NRL’s game of musical chairs took a dramatic step on Wednesday.

The Rabbitohs star is set to quit the club after a drawn-out negotiation process that saw South Sydney refuse to budge on a one-year contract extension offer.

His move to the Sharks would be a huge domino to fall in the NRL’s playmaker feeding frenzy, coming in the same week Broncos halfback Tom Dearden announced his decision to join the Cowboys next year.

The news was first reported by NRL 360 host Paul Kent on Tuesday night and it was further reported by Fox Sports’ James Hooper Wednesday that Reynolds has received an offer he can’t refuse.

The report reveals Cronullas has tabled a three year deal worth around $2.4 million — dwarfing the Rabbitohs’ offer of one year at around $800,000.

The report also reveals incoming Cronulla coach Craig Fitzgibbon has also spoken to Reynolds in an attempt to seal the deal.

It comes after Sharks playmaker Chad Townsend last week announced he is also moving to the Cowboys on a three-year deal.

Reynolds negotiations with South Sydney were reportedly at breaking point earlier this month when the club refused to improve its offer — and it appears to have finally forced Reynolds to make the call.

Mitchell Moses reportedly has less than a month to decide if he wants to activate one more season on his contract with the Eels.Source:Supplied

It takes another piece off the chess board in the NRL’s player market with the Broncos remaining a big player, according to reports.
With Dearden gone and star five-eighth Anthony Milford reportedly facing the prospect of not being offered a contract extension, the Broncos are reportedly discussing recruitment plays for Parramatta’s Mitchell Moses, Shaun Johnson and even under-contract superstars Daly Cherry-Evans and Kalyn Ponga.

Tigers star Luke Brooks had reportedly been linked to the Cowboys, but declared he wants to stay with the club. His future remains clouded after the Tigers signed former Manly star Jackson Hastings to return to the NRL from the Super League.

There is a lot of drama still to play out before the dust settles on this mess.