Ablett and Fyfe both cleared

Geelong veteran Gary Ablett and Fremantle skipper Nat Fyfe are both free to play in round nine after match review officer Michael Christian cleared them over separate incidents that occurred on Sunday. 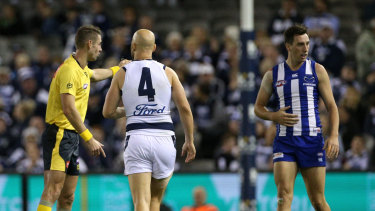 Gary Ablett gave away a free kick against Sam Wright.Credit:AAP

Ablett and Fyfe were both looked at by Christian over high hits towards North Melbourne's Sam Wright and Richmond's Tom Lynch respectively, but both incidents were deemed to be of insufficient force to constitute a reportable offence.

North's Sam Durdin was the only player suspended by Christian, with the Kangaroo offered a one-match ban for a bump that left Cats forward Gary Rohan concussed.