Home » Rugby League » A season reviewed: The good, bad and ugly of All Blacks’ turbulent 2021

A season reviewed: The good, bad and ugly of All Blacks’ turbulent 2021 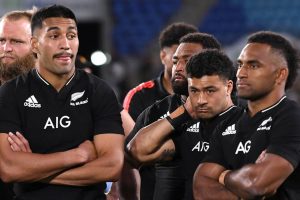 Liam Napier reviews the best and worst of the All Blacks’ 2021 season.

Put your ear to the ground and the rumblings you hear are not another National Party coup or Aucklanders stampeding towards their first pub brew in four months but a mass of discontent surrounding the All Blacks.

Dig deeper into the emotive fallout from the worst results-based season in 12 years and it can, in part, be traced back to the process to appoint the All Blacks coach after the 2019 World Cup.

Following the grim semifinal defeat to England, Ian Foster was never the public’s favoured contender as the masses demanded a scapegoat. After being left unappeased, that vocal majority always had the pitchforks at the ready; waiting for their chance to vent.

Unfortunately for Foster, the process to appoint him should have been handled much better. Several contenders – Dave Rennie and Jamie Joseph among them – did not apply due to timing, having already accepted offers elsewhere. Given the breadth of world-class New Zealand coaches populating the global game there is no way only two candidates should have contested the All Blacks head coach role.

In that regard alone, NZ Rugby must accept some ownership for the anti-Foster sentiment now proliferating.

It is an interesting experiment, however, to pause and consider what the reaction might be had Scott Robertson been appointed and delivered similar results to this point. Given the challenging Covid circumstances, the sell-out European arenas, the vastly superior opposition compared to Super Rugby, there are no guarantees he would have fared better.

In Robertson’s case, patience andtime would be commonly used phrases. He would undoubtedly be greeted by a sympathetic backdrop. Foster is presumably not afforded the same notions that accompany other new head coaches because he was pitched on a continuity ticket that essentially projected immediate improvements. The contrast is stark, though.

Passionate fans must be embraced. It means they care. Soak it up. Embrace it. While perspective is easily lost in the wake of successive defeats, those exceedingly high expectations are woven into the fabric that is the All Blacks. On the basis of feverish opinions, interest in the national game remains strong.

Two reviews will take place. The All Blacks conduct their internal debrief before the standard practice grilling from NZ Rugby at the end of the year where players and management provide feedback on where improvements must be made.

Those wanting Foster gone will be disappointed. There is more chance of Christmas being cancelled. Unless a major meltdown follows next year, he will see the All Blacks through to the 2023 World Cup after being reappointed for a further two years in August.

Once they emerge from quarantine the All Blacks, many of whom have been away from home for more than three months, will savour reunions with family and friends. But an uncomfortable summer of introspection awaits.

Perhaps that’s what this team needs. Difficult questions lead to hard truths. Change, evolution, is certainly needed. Two years out from the World Cup in France, despite the mitigating factors and the clear fine margins between the top five teams, there is every reason to be concerned.

So, what to make of this turbulent season and where must the All Blacks improve? Here’s a few thoughts to round out the year.

Can the All Blacks 12-3 season be considered a success?

No, is the short answer. Losing three tests for the first time since 2009 and suffering the first twin defeats in the northern hemisphere of the professional era dictates that premise. However, the Bledisloe Cup and Rugby Championship trophies can’t be overlooked and perspective can be seen in the world champion Springboks dropping five tests this year – two in succession to the Wallabies. Imagine the outcry had that been the All Blacks’ fate.

Judgement changes rapidly though. Had the All Blacks pulled off one victory against Ireland or France, a case could be made they navigated a mentally-taxing climate with comparative success. They may just have escaped with victory in Paris had Romain Ntamack been pinned in his ingoal. As it transpired, they finished with three losses from their four genuine heavyweight tests against the Springboks, Ireland and France that were always going to define their season.

Greater lessons emerge from losses and the All Blacks are certain to be much clearer on some personnel.

Yet it was not solely the results, but the worrying nature of the misfiring performances in the last two weeks that has sparked such unease.

One of the major concerns. The All Blacks could point to the record 101-tries and 720 points they scored this season but those figures are seriously skewed by notching centuries against heavily weakened Tongan and USA teams.

Regular changes week-to-week to counter fatigue built depth but did not allow combinations to settle, which hurt cohesion. Against the best defensive teams, there appears a disconnect between plans and players to the point those on the park looked lost at times. Beauden Barrett was a significant loss, but key decision-makers were consistently rattled and flustered in the last two weeks which resulted in aimless kicking as the only escape mechanism.

Much of the blame has been laid at Foster’s feet. Highly-regarded former Crusaders assistant Brad Mooar, as attack coach, must shoulder responsibility too.

Whether it’s seeking outside counsel or being creative from within, the All Blacks must draw on New Zealand’s No 8-wire history to bring innovative solutions to counter the crippling out-to-in defensive rush.

The use of deception, depth, variety, raw-boned power, angles, the blindside, must all be embraced. Change it up. The All Blacks need to regain their attacking spark and execution when confronted with suffocating, abrasive opposition.

For all the technicalities, rugby remains a simple game. When challenged physically, the All Blacks pack came off second best on big occasions.

The Springboks came hard at the breakdown, counter rucking in numbers and smashing the All Blacks’ maul. Ireland’s damaging ball runners set their relentless platform while forcing the All Blacks to live off scraps.

Other than a 20-minute period where the All Blacks had success taking the direct route up the middle in Paris, France scored two maul tries and largely dominated too. Lineout wobbles against the Boks and Ireland were another concern. Two yellow cards in Dublin and Paris also hurt, reflecting the stressed pressure-points.

From Fiji in July, to the Boks, Ireland and France; in one-on-one situations the All Blacks had trouble cleaning opposition over the ball. With their first-phase play slowed, predictable forward runners often battled to provide punch, leaving backline directors under fire. It was a vicious cycle.

In just six months, the All Blacks will host Ireland in what will be a highly-anticipated three test July series. It doesn’t get any easier after that, either, with their first two-test tour of South Africa since 2009 to follow.

Starting the season with the staunchest of modern foes leaves no room for error; much work to do in limited time.

The All Blacks need Super Rugby to be a rejuvenating experience where players shake off frustrations and regain inherent confidence. Midfield, loose forwards, outside backs; many combinations remain uncertain and, therefore, up for grabs.

While the All Blacks are certain to make cuts to their wider squad next year, they must remain open to backing alternative, form prospects. The likes of Blues wing Caleb Clarke, Crusaders powerhouse Leicester Fainga’anuku and Hurricanes midfielder Peter Umaga-Jensen could force their way in.

The hope, if Super Rugby Pacific is reduced to Aotearoa and Australian domestic competitions at first – due to New Zealand’s seven-day home isolation stipulations – is that these will turn into virtual All Blacks trials that fuel the fire and bring out the best in all involved. The worry, of course, would then be the likelihood of high casualties.

Whatever happens, the All Blacks must arrive at their best come July.

Yes, it was a disappointing end to the season but there were bright spots too, with several players performing strongly.

Player of the year

Consistently led from the front at No 8 and openside. Monumental effort against the Springboks from No 7 but, otherwise, featured prominently carrying and offloading off the back of the scrum. Superb leg drive in contact. Scored against France from close range. Can rest easy knowing he did all he could.

A magician. Cullen-esque in the way he weaves. Fifteen tries in 11 appearances on the wing, his second-favoured position, left Jordan two behind Joe Rokocoko’s record 17 tries in the 2003 season. Scored from two individual chip kicks against Wales and Ireland, both equally deft in their placement and bounce. Lethal acceleration and vision. Perhaps most importantly, though, recovered from a shaky outing under the high ball against the Boks, and being dropped, to return with confidence.

After impressing against the Wallabies, he missed much of the Rugby Championship with a hamstring injury – a shame as the door was open through Sam Cane’s absence. Returned on the northern tour with two standout performances against Wales and Ireland. Scored a try and showcased his growing ball-carrying ability in Cardiff. Backed that up the following week by making a staggering 28 tackles in a herculean effort in Dublin. Where he fits with Cane’s return to fitness, and Savea at No 8, is a conundrum. A move to six is possible but that risks compromising the All Blacks lineout.

Rookie of the year

The find of the season. Destructive ball carrying, diligent student of the game off the field. From the moment Taukei’aho was called up on 24 hours’ notice to replace Dane Coles – his hero – on the bench in Hamilton, he seized every chance that came his way. Provided huge impact off the bench in Paris to leave a lasting impression, and put heat on Coles and Codie Taylor to respond.

Irreplaceable. While short on match fitness, after returning from a three-month absence in Paris, the ball he threw to pick out Jordie Barrett on the touchline is case in point for why he remains unrivalled. Brad Weber and Finlay Christie, to be fair, also had compelling contributions.

Lost in the debate about whether best suited to centre or wing is the fact Ioane is a must-have in the backline. Struggled when paired with David Havili against the Boks but, alongside Quinn Tupaea’s direct presence, was one of the All Blacks’ best in Paris. Performed strongly against Wales from the wing and midfield too.

Sure, it was a depleted Welsh side, but the All Blacks blew the Six Nations champions away. Their set piece platform led the way. They were patient and clinical in attack. And the bench made a major impact in a ruthless final quarter. Seven tries to celebrate Beauden Barrett’s 100th test proves what this side is capable of when they are fully dialled in.