Supercars 2021: All the news and results from Hidden Valley, Darwin 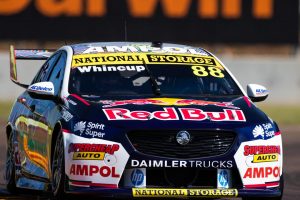 Jamie Whincup has revealed his replacement will get a first-year free hit with the retiring immortal to offer his heir a two-year deal.

On track to extend his legend this weekend after opening the Darwin Triple crown with a practice session win, Whincup declared the next Ampol Red Bull Racing would get a first deal double shot to prove himself worthy of wearing his crown.

Also a part-owner of his all-conquering race team, Whincup is hoping to unearth a future star with second series driver Brock Feeney in line to win the most prized seat in the sport.

“The reason why I’m stepping aside is to give young talent an opportunity,” Whincup said.

“Whether that’s in our team; even if it’s not an existing driver, then that spot will become available for an up-and-comer.

“You sort of need two years; I’d be pushing for any newcomer to try and do a two-year deal.

Whincup’s record breaking full-time career is coming to an end with the greatest championship driver of all time to become an endurance only racer next year.

Whincup has been at the top of his game this year before taking over as Triple Eight managing director and team principal at the end of the season.Source:Getty Images

And while he has been overshadowed by his teammate Shane van Gisbergen this year, Whincup has firmed to extend his race winning record of 123 after going 0.1297sec quicker than Scott Pye to claim a Hidden Valley practice win.

Striking late in the session to steal the fastest time, Whincup is hoping to rack up his eighth win in Darwin.

“The session was good, the weather’s predictable,” Whincup said.

“Track stays consistent year on year, and because it’s a Super Soft round, we’ve got plenty of practice tyres to use in practice to try and make the car go quicker.”

Whincup suggested the Darwin Triple Crown could be won in the garage with car set up to prove critical on the tyre destroying surface of Hidden Valley Raceway.

“You have got to have qualifying pace because qualifying is obviously really important but then you need to make sure you get a bit of a gauge of how long the tyre is going to last.

“We can take a guess, we’ll use that information from the race run to fire into the Excel spreadsheet and see how long we think we can go in the race before we have got to change.”

The Darwin Triple Crown continues on Saturday with practice before the first of three races.

Series leader van Gisbergen was only 0.3 off Whincup’s Friday pace in an indication that he will be in the hunt yet another win.

Originally published asWhincup flying in Darwin so why is replacement laughing?