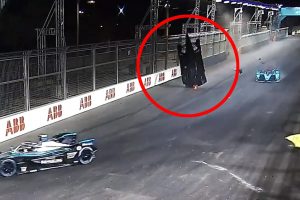 In scenes reminiscent of Mark Webber’s horror smash in Valencia in 2010, a Formula E driver was launched airborne before landing upside down in Saudi Arabia over the weekend.

Alex Lynn was battling Mitch Evans for 14th position in the second Diriyah E-Prix when they clipped wheels with three laps remaining.

The nose of Lynn’s car launched skyward, sending him sailing through the air before he crash-landed in a terrifying moment.

The 27-year-old was rushed to hospital for CAT scans but discharged overnight after being described by event organisers as “well”.

“It was not a nice accident. Basically, I was defending hard from Alex into (turn) 18 and he drove close to the wall,” Evans said.

“He didn’t really back out of it. Was there room? I’m not sure, I need to see the replay. I hope there was and I didn’t do anything out of order.

“But he clipped my rear wheel and had an aeroplane crash. It was really nasty.”

Alex Lynn is squeezed against the wall in the rear of the image.Source:Supplied

Evans said he had spoken to Lynn after the incident.

“He seems all fine but he’s gone (to hospital) as a precaution to make sure there’s nothing after the shock has worn off,” he said.

“It was not a nice moment. At one point I could see him above me. It was not nice. But the main thing is he’s all good.

“I saw him go into the wall and I jumped out to make sure he was OK. You never want to see that sort of stuff. He’s a friend as well. You don’t want to see people go through that.”

Lynn’s car landed upside down before skidding along the asphalt. (Photo by Francois Nel/Getty Images)Source:Getty Images

Britain’s Sam Bird, behind the wheel of a Jaguar, won the race in the Saudi capital.

Bird finished ahead of Dutchman and pole-sitter Robin Frijns of Virgin Racing and French driver Jean-Eric Vergne in a DS Techeetah.

However, Vergne was later penalised by 24 seconds for not having taken his second “attack mode” and finally finished 12th.

Portugal’s Antonio Felix da Costa, in another DS Techeetah, moved into the final podium spot instead.

An “attack mode” gives drivers an extra boost of power but they have to use it through a designated area off the racing line.

“Following his accident in today’s ePrix @alexlynnracing is conscious, talking and on his way to hospital for checks,” the Mahindra team tweeted.

The next round of the all-electric series takes place in Rome on April 10.