Supercars star Jamie Whincup will chase defending champion Scott McLaughlin down to the wire in a bid to regain the title following his round win in Townsville, saying he and other drivers had a duty to the sport to make racing as competitive as it could be.

Whincup won two of the three races in Far North Queensland, taking the first on Saturday and the second the following day, with McLaughlin landing the third and final race of the round late Sunday afternoon. 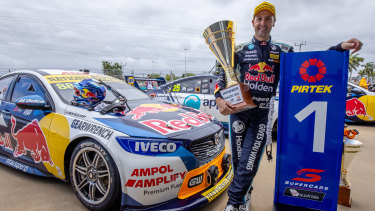 ''It's our responsibility to make the championship a strong one, not just one guy running out (and dominating). It's up to us to take the fight to next door (McLaughlin's Shell V-Power team) …..this weekend was a good step in the right direction and we kept the championship fight alive,'' the Red Bull Holden Racing Team driver said.

McLaughlin still holds the championship lead with 1556 points, 123 ahead of Whincup, with Chaz Mostert third. Whincup reduced the deficit by 54 points as a result of his strong performance in Townsville.

Cameron Waters also performed strongly in Townsville with two second placed finishes and a fourth, ensuring he was second in the round overall. 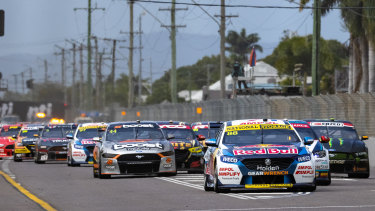 Jamie Whincup leads the field during race 20 in Townsville.Credit:Edge Photographics

He said he pushed hard to reel in McLaughlin in Sunday's final heat but couldn't quite manage to do so.

''I gave Scotty absolutely everything, I had nothing left.''

The Supercar circus stays in Townsville where the teams and drivers will all do it again next weekend.

Keys to the rest of the Stanley Cup Final: Stamkos, Seguin and more