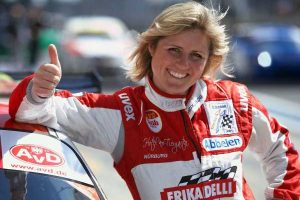 German racing driver Sabine Schmitz has died aged 51, it has been confirmed.

Known as the “Queen of the Nürburgring” racetrack, Schmitz also became famous for her role on BBC’s Top Gear where she first appeared back in 2004.

Following Jeremy Clarkson’s exit as lead presenter in 2015 she became a regular recurring member of the revamped team.

Frikadelli Racing, the team she founded with her husband Klaus Abbelen, confirmed the news early on Wednesday.

“She was 51 years old. Klaus Abbelen and all relatives and friends are deeply saddened by the immeasurable loss.”

“The Nurburgring has lost its most famous female racing driver,” the Nürburgring’s official account added on social media.

“Sabine Schmitz passed away far too early after a long illness. We will miss her and her cheerful nature. Rest in peace Sabine!”

Schmitz revealed last year she had been battling with cancer since 2017.

“Many of you have probably wondered why I was on the list of participants on our Porsche in the NSL and then didn’t drive after all,” she said in a social media post.

“I would like to provide enlightenment here, I think I owe it to my/our fans!

“Since the end of 2017, I have been fighting an extremely persistent cancer that has not been eliminated with the resources so far. It got a little better – but now it’s come back with full force.

“Now I have to draw all the strength and nerve to master the next powerful therapies … hoping something [good] will happen. So I say goodbye ‘probably’ for the first time this season.

“In addition, I would like to thank everyone for their help and support in my everyday life, and encouragement in writing!

“So sweethearts, now you have an update. Please stay healthy and cheerful, see you at the ‘Ring.”

Following the news of her death, Clarkson paid tribute to a “sunny person” who was always “full of beans”.

“Terrible news about Sabine Schmitz. Such a sunny person and so full of beans,” he said.

Current Top Gear presenter Paddy McGuinness added: “She gave me pointers on how to drive a Ferrari very fast and hunted me down in a banger race.

“Brilliantly bonkers and an amazing human being! RIP the great Sabine Schmitz.”

“She always will be unreachable in the Green Hell. Seeing her races was inspirational and motivating. My deepest condolences to the family. RIP Sabine.”

The Nürburgring in Germany is one of the most famous and most challenging racetracks in the world, known for its combination of high-speed straights and tight corners.

Schmitz estimated she had completed more than 20,000 laps earning her the “Queen of the Nürburgring” nickname and remains the only female driver to win the famous Nürburgring 24 Hours.