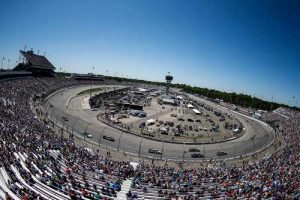 For anyone who’s asking “What time is the NASCAR race today,” the answer is similar to the reply that has been given for most of the season.

The Toyota Owners 400 at Richmond Raceway is slated for a mid-afternoon green flag, which has been NASCAR’s preferred time window for Cup Series races thus far in 2021.

Richmond will be the ninth race this year and the eighth scheduled for the daytime. Only the Martinsville race last weekend was scheduled for nighttime, and it wound up being mostly run in the late afternoon on Sunday after rain in Stage 1 forced a suspension on Saturday.

Below is all you need to know about the schedule for Sunday’s Toyota Owners 400 at Richmond.

The green flag for Sunday’s NASCAR Cup Series race at Richmond Raceway is scheduled to wave at 3:15 p.m. ET.

It’s unlikely that weather will delay the start. The National Weather Service’s midweek forecast for Richmond, Va., called for partly sunny skies and a high temperature near 70 degrees, the capper to a dry weekend.

Fox and Fox Sports 1 will televise NASCAR races during the first four months of the Cup Series schedule, through the June 13 All-Star Race at Texas. Fox will air Sunday’s race, third of the NASCAR Cup Series 2021 season.

NBC and NBC Sports Network are scheduled to air the remaining NASCAR Cup Series races in 2021, including the playoffs.

As is the case for all the Cup Series races on Fox this season, Mike Joy will call the race with the assistance of analysts Jeff Gordon, Clint Bowyer and Larry McReynolds.

Anyone who has a cable or satellite subscription can stream Sunday afternoon’s NASCAR race at Richmond live via FoxSports.com or the Fox Sports Go app.

For those who don’t have a cable or satellite subscription, there are six OTT (over-the-top) TV streaming options that carry Fox and FS1 — Sling, Hulu, YouTubeTV, fuboTV, Vidgo and AT&T TV. Of the six , Hulu, YouTubeTV and fuboTV offer free-trial options.

Below are links to each.

Below is the remaining schedule for the 2021 NASCAR Cup Series regular season and playoffs, beginning with Sunday’s race at Richmond Raceway.