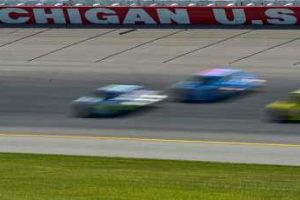 For anyone who’s asking “What time is the NASCAR race today?” the answer is that NASCAR is back to its preferred window for races.

The Cup Series is at Michigan International Speedway this weekend for the FireKeepers Casino 400. The 200-lap, 400-mile event is scheduled for a mid-afternoon start.

NASCAR is holding the majority of its 2021 Cup Series races in the daytime, but Sunday’s race will be the last afternoon event until the second round of the playoffs in October.

Below is all you need to know about the schedule for Sunday’s race at Michigan:

There is a slight chance that weather will be a factor. The National Weather Service’s forecast for the area near the track in Brooklyn, Mich., is for mostly sunny skies and a high temperature in the mid-80s, but there is also a 30 percent chance of showers and thunderstorms after 2 p.m.

Dave Burns, Marty Snider and Parker Kligerman will be the pit reporters.

Anyone who has a cable or satellite subscription can stream Sunday’s NASCAR race from Michigan live via NBCSports.com or the NBC Sports App.

Below is the remaining schedule for the 2021 NASCAR Cup Series regular season and playoffs, beginning with Sunday’s FireKeepers Casino 400 at Michigan, the 25th race of the season.