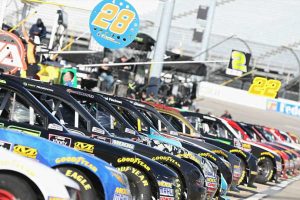 The starting lineup for Sunday’s NASCAR Cup Series race at Richmond Raceway was set by applying the statistical formula NASCAR is using for the majority of its 2021 races.

NASCAR is conducting qualifying and practice for just eight Cup Series races in the 2021 season. Six races in that group remain, starting with the May 23 event at Circuit of the Americas, a road course outside Austin, Texas.

Below is the starting lineup, which was set without qualifying, for Sunday’s NASCAR race on the 0.75-mile track at Richmond Raceway.

Who won the pole for the NASCAR race at Richmond?

Martin Truex Jr. is the polesitter for Sunday’s race based on NASCAR’s mathematical formula. Truex won last weekend’s rain-delayed race at Martinsville Speedway, making him the only multiple-race winner in the Cup Series after eight races in 2021.

Denny Hamlin, Truex’s Joe Gibbs Racing teammate, will start second. Hamlin is the series points leader despite not having won yet this year. He has seven top-five finishes in eight races. Hamlin led more than half the 500 laps at Martinsville but his car faded late and Truex took the checkered flag. Hamlin finished third as Chase Elliott rallied for a second-place finish.