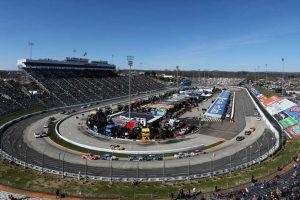 The starting lineup for Sunday’s NASCAR Cup Series playoff race at Martinsville Speedway was set by applying the statistical formula NASCAR is using for the majority of Cup races in 2021.

Drivers’ starting positions for the Xfinity 500, the final race in the Round of 8 and the ninth race of the 2021 Cup Series playoffs (2 p.m. ET; NBC, TSN, MRN, SiriusXM NASCAR Radio), were based on four factors:

NASCAR is conducting qualifying for just eight of the 36 Cup Series points-paying races in the 2021 season. Seven of those races have already been run; the one remaining race with qualifying is the season-ending Championship 4 race at Phoenix Raceway on Nov. 7. NASCAR cut back on qualifying to limit time spent at the track and reduce costs amid the COVID-19 pandemic.

Below is the starting lineup, which was set without qualifying, for Sunday’s NASCAR Cup Series playoff race on Martinsville Speedway’s 0.526-mile oval.

Who won the pole for the NASCAR race at Martinsville?

Stop us if you’ve already heard this one: Kyle Larson is on the pole for Sunday’s race. The playoff points leader was awarded the top spot for a third consecutive time following his win at Kansas, which was his third playoff win in as many weekends. He is the only Round of 8 driver who’s already in the Championship 4 heading into the Martinsville eliminator.

Larson’s Hendrick Motorsports teammate Chase Elliott will line up next to him on the starting grid. Elliott finished a distant second to Larson at Kansas after his car made contact with the outer wall late in the race.

Just behind Larson and Elliott will be Joe Gibbs Racing teammates Denny Hamlin and Martin Truex Jr. in third and fourth, respectively. The starting spot is a big boost to Truex, who is out of a playoff spot by three points coming into the race.

The bubble drivers figure to produce the most drama Sunday. Positions 4 through 7 are separated by six points. Kyle Busch is in the No. 4 spot but he’s just one point ahead of Ryan Blaney, the first driver out at the moment. The live standings will be volatile.

Elliott (34 points) and Hamlin (32 points) come into the race with sizable leads over Blaney as they sit in second and third in the standings, respectively.

ELLIOTT vs. HARVICK: Rundown of their feud

Aside from the closeness of the standings, there’s another reason the four drivers below can have hope: A playoff driver who wins a race in the Round of 8 automatically qualifies for the Championship 4 race Nov. 7 at Phoenix Raceway. Problem is, only Larson has won a race thus far in the Round of 8.

NASCAR used a mathematical formula to set the starting lineup for Sunday’s playoff race at Martinsville Speedway, the Xfinity 500. Thirty-eight cars were entered, two fewer than the number for a full field. Playoff drivers are denoted by a “P” next to their names.

Per NASCAR’s playoff rules, the top eight spots in the field went to the eight remaining playoff drivers, but the starting order was based on the mathematical formula NASCAR has used for the majority of its races this season.