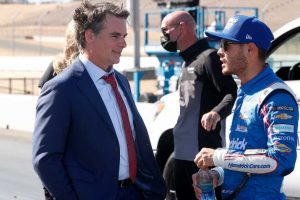 Jeff Gordon’s time in the broadcast booth will be coming to an end. The 49-year-old will be leaving his role as a broadcaster on Fox Sports at the end of 2021 to take on a vice chairman role at Hendrick Motorsports.

According to Bob Pockrass of Fox Sports, Gordon will serve as “No. 2 in charge” under Ricky Hendrick, the namesake of the company. Gordon will focus on competition and marketing in his new role.

The 49-year-old racing legend has been on Fox Sports’ air since his retirement. He began his career as a special guest on the broadcast but was hired full-time as an analyst in May of 2015.

“I cannot put into words what Hendrick Motorsports means to me,” Gordon said in a statement, per ESPN. “In many ways, it’s my home and the people here are my family. I’ve never lost my passion for the organization, for our sport, and for the sheer challenge of racing and winning at the highest level.”

Hendrick, in turn, spoke highly of Gordon and his involvement with the team over the last 20 years.

“I’ve always been impressed with his business instincts,” Hendrick said of Gordon. “On some level, he’s been involved in every major decision we’ve made over the last two decades, and his influence has continued to grow since he stopped driving.”

Hendrick is 72, and while he indicated that he doesn’t plan on retiring soon, it appears that Gordon will be his eventual successor. Until then, Gordon thinks that the two will work very well together.

“Rick and I have a shared vision, which is based on the values he’s instilled, the culture he’s built and our desire to be the very best in all categories, on and off the track,” Gordon said.