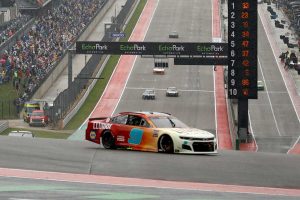 AUSTIN, Texas – Chase Elliott raced to a short and slippery victory Sunday as rain spoiled the end of NASCAR’s debut at the Circuit of the Americas, where drivers struggled to navigate the winding course in the first rain race in Cup Series history.

Elliott, the defending series champion, won for the first time this year and the sixth time on a road course. He has won five of the last six road races.

He also earned his 12th career victory, No. 800 for Chevrolet and No. 268 for Hendrick Motorsports, tying Petty Enterprises for most victories.

The race was called while under a red flag on Lap 54 of 68 because of poor visibility and standing water on the track caused by heavy rain. Elliott’s teammate, Kyle Larson, and Team Penske’s Joey Logano rounded out the top three.

Retweet to congratulate @chaseelliott and the No. 9 crew on their rain-shortened WIN at Circuit of The [email protected] | #NASCARpic.twitter.com/dAktUDOs6I

It was a disappointing finish to the series’ first run at a track built for Formula One, and organizers will have to decide if they want to make the Austin track a regular stop.

The rain started on the opening lap and several drivers complained about treacherous conditions that limited visibility, and caused a pair of violent crashes. The race was stopped twice before it was called. Veteran Kevin Harvick called it the most dangerous racing he’s ever done.

The trickiest section was the long, high-speed straight as the cars risked hydroplaning or not being able to see even a few feet ahead in the spray kicked up by the cars around them.

The worst crash came when Cole Custer, seeking a visible racing line, smashed into the back of Martin Truex Jr. – who had just hit Michael McDowell – and Custer’s front end briefly burst into a fireball on lap 25. Both drivers were checked at the medical center an released.