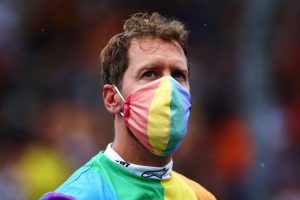 Sebastian Vettel was reprimanded by the F1 stewards after wearing a t-shirt showing support for the LGBT community at Sunday's Hungarian Grand Prix.

The Aston Martin driver wore a rainbow t-shirt with the words "one love" before the race in Budapest.

The gesture was particularly poignant given a recent law passed in Hungary that banned gay people from featuring in school educational materials or TV shows for under-18s.

Vettel's decision though has seen him come under fire from the stewards.

He along with Carlos Sainz Jr, Valtteri Bottas and Lance Stroll were all called for “allegedly not following Race Director’s instruction” over “pre-race procedure”.

Part of the document from the FIA about the pre-race ceremony states that drivers must “remove their t-shirts” during the national anthem.

Vettel eventually finished second at the Hungaroring and said on Sky Sports after the race that he would happily be disqualified for his gesture.

“I heard it’s because I left my shirt on for the national anthem,” he said when quizzed on why he was called.

“I’m happy if they disqualify me. They can do whatever they want to me, I don’t care. I would do it again.”

Vettel ultimately escaped a penalty and his reprimanded is his first of the season.

In a statement put out the German claimed he simply forgot to remove his t-shirt due to the onset of rain.

The four-time world champion was ultimately denied a first win since 2019 by maiden victor Esteban Ocon.

A chaotic race saw Valtteri Bottas and Sergio Perez both retire on lap one after a collision.

Max Verstappen picked up damage and could only finish in 10th as he surrendered his championship lead to Lewis Hamilton.

The Mercedes driver made a strategy error and found himself last only to fight back to third.

F1 will now break for the summer before returning in a month.

The law was passed during the Euros and prior to Hungary's match with Germany there was talk of the Allianz Arena being lit up in rainbow colours as a show of support.

UEFA however stepped in and vetoed the idea which saw seen as a political gesture, something sporting authorities are often keen to avoid.