Vettel cleaned up litter in grandstands after British Grand Prix 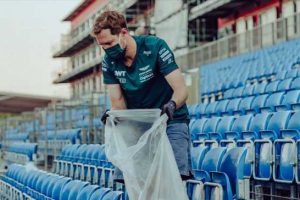 Sebastian Vettel stayed behind after the British Grand Prix to clean up litter in the grandstands of the Silverstone circuit.

Aston Martin driver Vettel was forced to retire from the race after 40 of the 52 laps, but opted against an early departure.

Once the event was finished and he had completed his media commitments Vettel visited the grandstands to help marshals clean up some of the rubbish left by Silverstone’s 140,000 fans.

Aston Martin tweeted pictures of Vettel carrying bags of rubbish, with the text: “Sunday evening at Silverstone. The #BritishGP weekend is over.

“But for Seb, the race for the planet never ends”

Vettel’s environmental activism has stepped up since the start of the pandemic. The four-time world champion took an internship in organic farming during lockdown.

He plans to plant a meadow for his daughters at their home in Switzerland in the shape of a love heart.