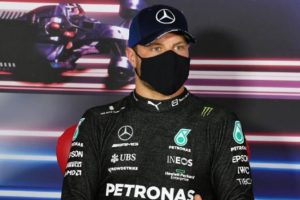 Toto Wolff has claimed that both of Mercedes’ Formula E drivers deserve an F1 seat in a hint that could leave Valtteri Bottas without a drive for the 2022 campaign. Mercedes are currently weighing up who will partner Lewis Hamilton next season.

George Russell is expected to move to the Silver Arrows from Mercedes.

And there are strong suggestions that Bottas will head in the opposite direction, back to the team he drove for from 2013 to 2016.

However, Wolff’s comments that Nyck de Vries and Stoffel Vandoorne deserve an F1 seat show they are in his thinking.

“Both drivers have the talent and the work ethic and the intelligence to be in Formula 1,” Wolff said.

“They both deserve to be Formula 1 and I would very much hope they can find their way back.”

If either De Vries or Vandoorne move to Williams then it would leave Bottas with limited options.

But the Finn, who sits fourth in the Drivers’ Championship this term, is not concerned.

“I am not aware of those sayings,” Bottas said.

“I don’t really read F1 related media reports so it is the first time I hear anything like that.

“Of course, you will always try to praise your drivers, whether it is in different categories and they are very good drivers.

“There are not many seats in F1 but it is not really my concern at the moment and is nothing that is on my mind.”

Meanwhile, Wolff has previously stated that he would help Bottas find a new seat if his spell with Mercedes came to an end.

“If there is a situation where we want to give someone else a chance, it’s not just about my relationship with him (Bottas). It is my duty [for him] to have a great future because he deserves it,” the Austrian said.

“He has been a team-mate of the best F1 driver in history and it is not always easy to shine in [that environment]. But he has been fantastic.”

Russell expects his future to be sorted during the summer break, which comes to a conclusion at the Belgian Grand Prix on August 29.