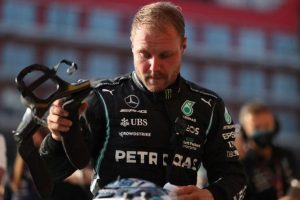 Mercedes look set to make a decision on who will partner Lewis Hamilton next season in the coming weeks and Valtteri Bottas is seemingly weighing up his options. With Hamilton already tied up to a new contract at Mercedes, attention now turns to who his partner will be for next season.

Mercedes have been handing Bottas one-year contracts for the past few seasons now, trusting the Finnish driver to provide the balance in the team to win consecutive Constructors’ Championships.

But this year is tighter than ever between Mercedes and Red Bull with just 12 points separating the two teams after 11 races.

Bottas has been unable to finish higher than third this season and his retirement at the Hungarian Grand Prix raised more questions about his future.

“No, the mistake was unfortunate with big consequences,” Wolff said.

“He got sandwiched by the two cars in front, lost all downforce and then it was already too late, and, it doesn’t influence at all the decision.”

But with no decision made as of yet, Bottas appears to be looking at all his options.

And Bottas is said to be ‘aware’ of the potential to return to Williams and replace Russell should the Briton move to Mercedes.

According to Formula One’s official website, Bottas is the top target for Williams should Russell leave.

Despite Williams’ lack of success in recent years, Bottas is said to be curious about working with the team as they try to work their way up the grid.

Bottas broke into Formula One with Williams back in 2013, but it was the following season where he began making a name for himself.

A regular on the podium midway through the season, Bottas ended up finishing fourth in the Drivers’ Championship, ahead of both Sebastian Vettel and Fernando Alonso.

Williams haven’t had a podium finish in F1 since Lance Stroll clinched third in the 2017 Azerbaijan Grand Prix.

Daniil Kvyat, Nico Hulkenberg and Alex Albon are also said to be on their list of targets to replace Russell.

And there is also a suggestion that F2 driver Guanyu Zhou could be a contender for a spot at Williams.