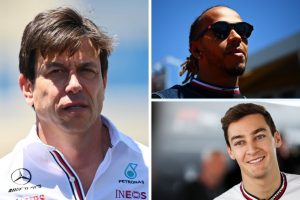 Mercedes team principal Toto Wolff has suggested that Lewis Hamilton’s cordial relationship with George Russell may be tested if both drivers find themselves racing at the very front of the grid in the not-too-distant future. The pair have struck up an impressive bond since Russell arrived at Mercedes at the start of this year and are showing no signs of friction in spite of the team’s disappointing results over the course of the campaign to date.

Russell has edged out Hamilton in terms of points over the first nine Grands Prix and has spoken of his admiration for the 37-year-old on a number of occasions during his time in the paddock. Wolff has refused to rule out the possibility of their relationship becoming strained, though, if Mercedes manage to claw back their performance deficit to the likes of Ferrari and Red Bull over the coming weeks and months.

“I can say that within the team he [Hamilton] was always very positive,” said Wolff at the Canadian Grand Prix, which was eventually won by Max Verstappen despite the best efforts of second-placed Carlos Sainz.

“The way the two of them work together is really astonishing. In the briefings they keep asking each other questions.

JUST IN: F1 bosses accuse FIA of ‘tipping off’ Mercedes over porpoising trouble

“I guess it is going to be different if they race on the very front but it is super how the two progress and I am happy for Lewis because he has had bad luck on his side. He could have been on the podium a few times if the safety car wouldn’t have worked against him.”

Hamilton managed to secure an elusive podium finish at the end of Sunday’s race in Montreal, with Russell crossing the line in fourth place to seal a welcome haul of points for Mercedes. Wolff insisted after the chequered flag that the Silver Arrows still have plenty of work to do, though, in order to return to the top of the pecking order between now and the end of the season.

“The way forward, we just need to develop the car in a different window than we had,” the Mercedes boss told Sky Sports F1.

“We were having it really low on the ground and clearly that doesn’t function. I think we have development direction, we didn’t get it right in many areas but we own the problem and we need to fix it.”

It remains to be seen whether Mercedes will be able to iron out their lingering issues in order to close the gap to their Constructors’ Championship rivals in the near future. They will be desperate to produce another strong showing at next weekend’s British Grand Prix, a race that Hamilton managed to win last year despite tangling with Verstappen on the first lap.