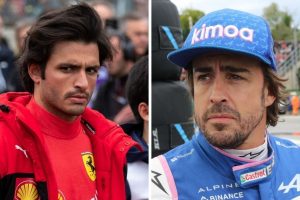 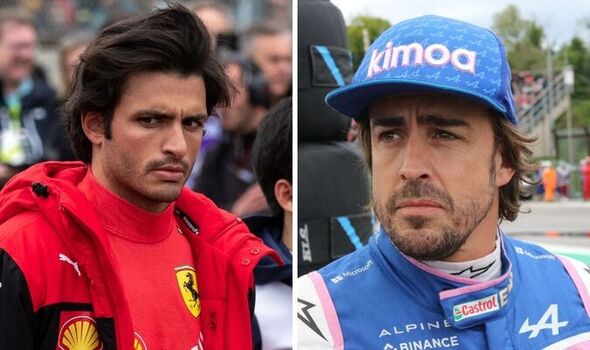 Fernando Alonso was left furious with Ferrari’s Carlos Sainz for holding up and preventing him from progressing into Q3 on Saturday at the Miami Grand Prix. Alpine were already down one driver for qualifying after Esteban Ocon the Frenchman suffered a cracked chassis following a crash in FP3.

But there were still high hopes Alonso would be in a position to make the top 10 after showing good pace all weekend. Only five drivers set a faster time than Alonso on Q1 with the Spaniard comfortably through to Q2.

But the two-time F1 world champion was in danger of dropping out late in Q2 with the need for one final lap. Several drivers were in a similar situation though, leading to traffic on the track in the final few seconds of the session.

Alonso appeared on course for a fast lap, but he then felt impeded by Sainz coming through the tricky chicane.

JUST IN: Lewis Hamilton hit out at FIA before new row: ‘Trying to slow us down’

“It’s a real shame because a Ferrari was in my way throughout the second sector, which cost me four tenths,” Alonso said. I was six tenths better than my previous lap but came out of Turn 16 only one tenth ahead, so I lost four tenths or half a second in traffic. That’s unacceptable.”

The incident was looked at by the race stewards but they deemed no further investigation was necessary. But Alpine boss Otmar Szafnauer can’t understand why Sainz got in the way of Alonso at the end of Q2.

“It was a disappointing qualifying for us because we couldn’t show our true pace,” Szafnauer said. “The result doesn’t reflect our actual performance.

“Fernando would have been at least in the top ten if it weren’t for the traffic. I don’t know exactly what Carlos was doing because Fernando was on a fast lap while he was driving slowly on the track.”

Sainz eased through to Q3 and was in contention for pole in the second run, only being pipped to first by his team-mate Charles Leclerc. Alonso, meanwhile, will start 11th with Ocon starting at the back of the grid for tonight’s race.