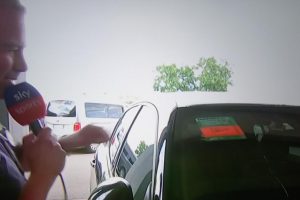 Lando Norris had more success on the racetrack than on the road as he qualified fourth for the Hungarian Grand Prix.

The McLaren driver had shown strong pace all weekend at a circuit which was expected to suit his car and he took that pace into qualifying. He was third entering the final seconds of Q3 with just the Ferraris of Carlos Sainz and Charles Leclerc ahead of him, only for his friend George Russell to produce the lap of his career to put his Mercedes on pole position.

Norris once again led the way for McLaren, with team-mate Daniel Ricciardo a disappointing ninth, and his race pace in practice suggests the Brit could be in the fight for a podium finish at the Hungaroring.

It seems Norris’s journey to the circuit wasn’t as a seamless though. During his post-qualifying Notebook programme, Sky Sports F1’s pit-lane reporter Ted Kravtiz took a tour of the F1 drivers’ car park. As he pointed out each driver’s vehicle he spotted a chip in the windscreen of Norris’s car.

“Oh no, Lando, a stone chip,” he said. “I do hope Lando has brought his full insurance or signed the damage waiver thing because 'Landi' has had a stone chip there.”

Can Lando Norris win the Hungarian Grand Prix? Have your say in the comments section below.

Kravitz has been referring to Norris as ‘Landi’ for most of the weekend following an amusing error in a pre-race document issued by F1's governing body, the FIA.

“If you’re wondering why I’m calling him Landi Norris now, the FIA did a document where they misspelt Lando Norris and called him Landi. I think it’s kind of cute so I’m going to call Landi, or Nozza.

“Landi Nozza Norris was excellent today and was fourth in the grid.”