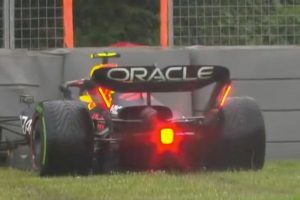 Red Bull have suffered a major blow ahead of the Canadian Grand Prix after Sergio Perez crashed out of qualifying at a rain-lashed Montreal.

Having made it into the second part of qualifying, he was looking to seal a place in Q3 and fight for pole. However, the Mexican locked up under breaking early in the lap and went straight into a barrier. Perez, who is second in the standings behind teammate Max Verstappen, remained in his car for some time as they tried to engage reverse and creep back to the pits.

However, after a chat with his race engineer over the radio, the Monaco Grand Prix winner was forced to give up while the session was red-flagged.

With Ferrari’s Charles Leclerc having to start on the back of the grid after taking a new engine, Red Bull were hoping to heap more misery on the Scuderia with a front-row lockout.

However, those plans were scuppered by the Montreal weather, with Q1 and Q2 being run in wet conditions which caught Perez out. After finally getting out of the car, Perez was forced to make a long walk, through trees and bushes, back to the pits.

Who will win the Canadian Grand Prix? Have your say in the comments section below.

Addressing the incident, Red Bull team boss Christian Horner told Sky Sports: “He managed to get it into reverse but the nose box was wedged into the barrier and he couldn't get it to release.”

However, Horner does believe Perez can recover during the race, which is expected to be run in dry conditions.

“This is a track you can overtake at. We’ve seen that at many of these races in the past,” added Horner.

There was better news for Red Bull as Max Verstappen took pole position with Fernando Alonso second fastest in his Alpine.