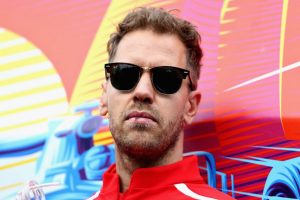 Sebastian Vettel may have put decided to sell several supercars from his Ferrari collection this year – but that has nothing to do with his recent move to Aston Martin.

The four-time F1 World Champion with Red Bull had a tricky time at Michael Schumacher’s former home, finishing no higher than second in his first four seasons and slipping to 13th in 2020.

Having sealed a high-profile move to the rebranded Racing Point F1 team, the 33-year-old was seen to be selling several cars from his collection, some of which worth over £1m.

As well as a 2016 LaFerrari, 2015 Ferrari 458 and one of only 400 Ferrari Enzo cars ever made, Vettel has also parted ways with a Mercedes SLS and BMW Z8 Roadster in a bid to free up space.

He said: "The rationale was to free up a bit of space. I am very busy in my life, so I don't get the time to enjoy and drive around doing nothing, so no big secrets."

He added: "The whole of last year was a challenge and I thought about it a lot and I was not happy with how it went.

"But I have accepted it and have been living through it and I don't have any regrets. Ultimately, I am very much looking forward to this year.

"I am very much at peace with last year, I know it was not to my standards that I hold myself. "The spirit is great and people are very enthusiastic and it is a very small team when you compare it to Ferrari, so things are a bit different.

"But it is not about the fancy looks, it is about the work behind the scenes and from what I have seen, the people are very capable and very talented.

"It is not a secret that in the last few years you needed to be in a Mercedes to win the championship.

"But F1 is changing and maybe that gap could shrink and that is the hope, to be closer to the top and not just on the podium if you got lucky.

"Age-wise, I feel like I have it in me, but then it depends on the circumstances in how things are going in the near future."