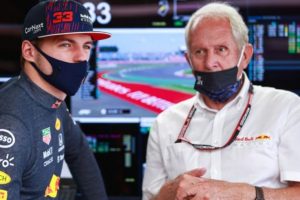 Hamilton leads the Drivers’ Championship by eight points having finished second at the Hungarian Grand Prix before F1’s summer break.

Verstappen had been at the top of the standings but back-to-back accidents, which were not his fault, has seen him slip down to second.

The Dutchman is applying intense pressure on Mercedes as Red Bull try to end the Silver Arrows’ seven years of dominance.

And Liuzzi, who knows exactly what it is like to feel the pressure of Red Bull bosses, has given his take on Verstappen’s efforts.

“He deserves everything he is having. He is in a new generation of Formula 1. Max has always showed amazing performance and really big speed.

“But in the first couple of years he was doing quite big mistakes, he crashed quite often and in my day that was less ‘allowed’. Every time I was breaking a front wing, I had [Helmut] Marko shouting in my ear. Now it’s a different thing.

“Max is a driver who deserves the World Championship, because he is showing amazing speed. He’s growing even though he still makes some, not maturity mistakes but he follows his heart a lot more than his head.

“But he fully deserves a World Championship. I really hope for him that in the next years, I don’t know if it will be this one or the next one, he can have a good car to continue fighting.”

Liuzzi also offered advice to Verstappen on how to bounce back from his recent setbacks.

“The championship is long and some nightmare races can happen which can change the full championship situation, so it’s good for the sport that it’s up and down.

“It keeps everybody active and focused for not giving up for the championship.

“So I think we will have a season like this from now until the end of the season.

“It’s a shame if I look at the driver point of view, because he [Verstappen] was clearly showing that he deserved to win and fight for this championship.

“But it’s good that we are in the middle of the season and we don’t have a clear winner yet. This will be a good fight until the end of the year.”