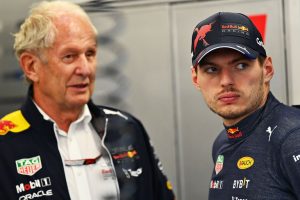 Red Bull boss Helmut Marko has claimed Max Verstappen’s outburst would do the reigning world champion “no harm”. Verstappen slammed organisers of the prestigious Le Mans 24 Hour Virtual race after he was disconnected.

He described the event as a “clown show” and pledged he would never return to the online event again. The 25-year-old is a keen gamer and takes part in a range of online championships with sim racing squad, Team Redline.

However, Marko hinted Red Bull did not have concerns about the Dutchman’s behaviour with just weeks to go until the new season. When asked if the team were worried about the outburst or his pledge to never compete in the race again, Marko said: “The opposite is the case.

“It didn’t exactly do him any harm when it came to his two titles.” A technical glitch in the server hosting the race dropped Verstappen down to P15 despite leading with just six hours to go.

The incident came hours after the same server had come down on Saturday evening, causing the race to be temporarily suspended. The organisers admitted that the issue was down to a “suspected security breach”.

After the glitch, the F1 star had no interest in completing the race and pulled into the pits to retire the car. He then went on a passionate outburst to his Twitch followers where he urged his streamers to uninstall the software.

He added: “They can’t even control their own game. This is the third time already that has happened to me now, being kicked off the game while doing this race. This is also the last time ever because what’s the point? You prepare for five months to try and win this Championship, you are leading the Championship, you try to win this race which you have prepared for two months and they handle it like this. Honestly, it is a joke. You cannot even call it an event. It’s a clown show.”

He posted: “If it’s a clown show, that makes me and my hard-working dedicated friends, clowns. Usually after a 24-hour race I am tired but today has been an ugly, exhausting display of the toxic side of Sim Racing and social media. I am proud of what the Le Mans Virtual Team has achieved.

Constandurus added: “But calling other humans out so strongly and feeding the community with negativity when in such a influential position was not wise and only fuels the toxicity in the community which only harms the Sim Racing world as whole.”