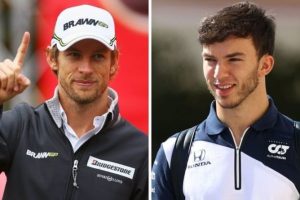 Pierre Gasly hopes his AlphaTauri team can follow the example set by Brawn GP by taking advantage of new technical rules to shock the front-runners in 2022. Brawn raced out of the blocks in the 2009 season, with Jenson Button roaring to the title in a car which, for a long time, was far superior to any other on the grid.

The team came into existence after Honda’s racing team announced it would be exiting the sport at the end of 2008, with Ross Brawn and Nick Fry completing a management buyout.

Honda had only had very limited success in its three years as a full team owner between 2006 and 2008, but it soon became clear that Brawn GP was going to be the team to beat in 2009.

Button won six of the first seven races and, although Red Bull improved enough to run the title race close towards the end, it was enough to win the title.

And that was that for that iteration of the team, as it was bought out and rebranded as Mercedes for 2010 and went on to become the powerhouse it is today.

In the hybrid era, which began in 2014, only Red Bull and Ferrari have come close to challenging the Silver Arrows’ dominance of the constructors’ championship.

But Gasly believes the rule changes for 2022 gives other teams the opportunity to rock the apple cart, in the same way Brawn did 13 years ago.

He hopes his AlphaTauri team can nail its designs and challenge the big boys in 2022.

“I’m excited because it’s an opportunity. For the team and for me,” the Frenchman said in an interview with Auto Motor und Sport.

“At the same time, it would be naive to say it’s just an opportunity for us. Anyone can take a big step forward. I’m aware of that. I know that anything can happen. For better or for worse.

“What I’ve seen of the car so far makes me feel positive. I’m looking forward to the tests in Barcelona. Hopefully, we’ll have a surprise like Brawn GP back then.”

While he says he feels positive about what he has seen so far, Gasly admits it is too early to tell where the AlphaTauri 2022 car is right now in terms of performance compared to the rest of the grid.

They won’t know for sure until all 20 cars are put through their paces at testing in Barcelona at the end of February.

“In the simulator, you work with assumptions, what the engineers think the car will be like, how it will behave,” Gasly added.

“It’s then up to the driver to give clear feedback. Where are the biggest limitations? Where could the most lap time be?

“That gives the engineers a direction to go for. But we’ll have to wait until the car is running in real life. Until then, it’s hard to estimate.

“It’s very different from the last few years. It will be a big factor how fast you move from the first test. How quickly you learn and improve.”