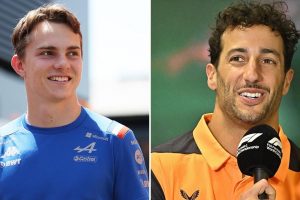 Oscar Piastri has spoken of his heightened respect for Daniel Ricciardo as he prepares to replace his fellow Aussie at McLaren from 2023.

McLaren have ditched Ricciardo two seasons into his three-year contract after a hugely disappointing spell for the 33-year-old since his arrival from Renault.

The Woking squad moved for the highly-rated Piastri earlier this year. Alpine had wanted to promote their reserve driver to a race seat following Fernando Alonso’s decision to sign for Aston Martin. But by that point, Piastri already had a valid contract with McLaren, as demonstrated by F1’s Contract Recognition Board (CRB).

The manner of his move to McLaren could have caused tension between the Australians, but Ricciardo has held clear-the-air chats with both Mark Webber, Piastri’s manager, and the man who will take his place. Ricciardo even took the time to call Piastri and wish him well, a gesture the youngster appreciated greatly.

“That was a really great thing, for Daniel to get in touch,” he told the In the Fast Lane podcast. “I was planning on getting in touch myself, but with the timing of things, he was obviously at a race [the Belgian Grand Prix], and quite frankly I didn’t actually know if he wanted to hear from me.

“I was trying to think of what to say, but he beat me to it. A true professional, Daniel is. My respect for him was already extremely high, and it’s only gotten higher in the way he’s responded.”

Despite his recent struggles, Ricciardo remains one of the most successful Australian drivers in history with eight Grand Prix wins to his name, seven with Red Bull and one with McLaren.

Will Piastri fare better at McLaren than Ricciardo? Have your say in the comments section below.

“It is a bit of a sliding doors moment, but I think if I can get close to emulating what success he’s had on track and also the character he is off the track, then I think I’ll be doing a reasonable job,” said Piastri of his countryman.

As the saga regarding his switch played out over the summer – with Alpine making a series of scathing public statements while McLaren and Piastri kept quiet – he admitted it was a stressful time.

“I think the first [emotion] was obviously relief,” Piastri said of his reaction when the move was finally rubberstamped by the CRB. “It was obviously a pretty stressful time the hearing.

“It’s something I've been working towards since I started racing way back when — I think it was about 12 years ago or 11 years ago now — so to finally know what my future holds firstly and, secondly, that it would be an F1, that was a relief and a very, very happy moment.”