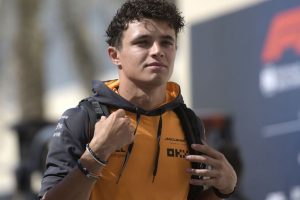 McLaren driver Lando Norris says they need to “do a better job with making a better car” after suggesting they can emulate Ferrari’s progress last season. After a disappointing 2021 campaign, Ferrari made the most of regulation changes last year to win four Grand Prix races and finish second behind Red Bull. And Norris is hoping McLaren can do something similar, after they dropped to fifth last season and earned just one podium spot.

“I think what they did was extremely good,” Norris told Motorsport.com. “Going from where they were [in 2021], from almost getting beat by us, to going to where they are getting wins, fighting for podiums every single weekend… That’s what we need to be aiming for. That level of a jump from one season to another.

“They’ve obviously had, not the luck, but they’ve maximised a new era, a new rules set for Formula 1 with new cars, which has allowed them to make a bigger jump than ever. But there’s still plenty of opportunities for us to achieve something like that.

JUST IN: Mercedes boss Wolff opens up on tragic loss of father at age of 15

“I think already next year we need to make progress. I have good faith that we can. We have a huge amount of what we need in the right areas and the right people and so on. It’s just that final hurdle, the final thing to get us up to the same level to then have no excuse against Red Bull, Mercedes, and Ferrari. The team know that they need to do a better job.”

Norris’ comments come after McLaren chief Zak Brown claimed it will take the team until 2024 or 2025 to bridge the gap between them and their rivals, with Norris’ current deal due to expire in 2025. “I think [we will see the gap close in] probably another two years,” Brown said in December.

“Even though we’re all kind of on the same money now… some teams have bigger infrastructures. We’re still waiting for our wind tunnel which is down the road to be done, which will be done here shortly, and new simulation [equipment]. So even though everyone’s kind of on an equal playing field at most teams from an annual expenditure standpoint, a handful of the teams have come in with a better technology infrastructure, which we’re catching up on and some other teams are, so I think that will need to happen.”

Norris has previously refused to rule out a move away from McLaren when his current deal expires, having been linked with Red Bull, and the 23-year-old stated in October that the team can have “no excuses” if they are not challenging by 2024. He told Auto Motor und Sport: “I have to have faith that my team can do a good job. [2024] will be our first year in which we have no more excuses.

“At the moment we can still come up with good excuses. Believe me, nobody likes to say that we had the best possible weekend and that we’re behind for the reasons just mentioned. We always look at what we can do better. 2024 will be the first year in which we operate with our infrastructure almost at the level of the top teams.”