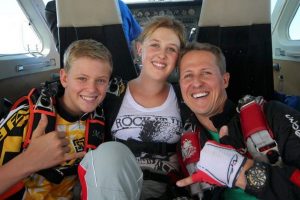 The family of Michael Schumacher are set to release unseen footage of the stricken Formula One legend on Netflix.

Schumacher is often regarded as the greatest Formula One driver of all time, having retired with a now a joint record-seven World Drivers’ Championship titles, 91 wins, 68 pole positions, and 155 podium finishes.

However, his world was catastrophically changed after suffering a “traumatic brain injury” caused by a horrendous skiing accident

The legendary German was immediately airlifted to a hospital in Grenoble; undergoing two surgeries, before being put into a medically induced coma, which he was in for six long months.

Nearly eight years from the accident in the French Alps, his family are ready to tell his story in a Netflix documentary chronicling his illustrious career and his recovery.

“The documentary explores the many facets that made and define this complex athlete and accompanies him on his meteoric rise in this challenging and dangerous sport, which is followed by millions worldwide,” said an official synopsis for the documentary.

is Michael Schumacher the greatest Formula One driver of all time? Comment below

Michael Schumacher’s journey has captured the imagination of millions, but there is a lot more than motor racing to the success of this very private man.”

The documentary will include very rare interviews from his family members, as well as other legendary drivers such as Sebastian Vettel.

It has also promised rare interviews and archival footage previously unreleased to pay tribute to his momentous career.

Schumacher himself will not be participating in the documentary that will be released on Wednesday, September 15th on Netflix, but it has received the full support of his family who will take part in the documentary.

“At the heart of Michael’s story are his parents, his children and Corinna Schumacher, his biggest support and the love of his life,” the logline confirmed.