Home » Motor racing: Miami added to F1 calendar in 2022 in push for US fan share

Motor racing: Miami added to F1 calendar in 2022 in push for US fan share 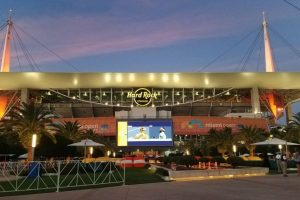 PARIS (AFP) – The Miami Grand Prix will join the Formula One calendar from the 2022 season, the organisers said on Sunday (April 18), in a 10-year deal that adds a second American race to the championship after the United States GP in Austin.

In a statement, F1 said that the race will take place at a new track round the Hard Rock Stadium in Miami Gardens north of the Florida city.

“We are thrilled to announce that Formula 1 will be racing in Miami beginning in 2022,” said F1 CEO Stefano Domenicali.

“The US is a key growth market for us, and we are greatly encouraged by our growing reach in the US which will be further supported by this exciting second race.”

He added that it would be staged “in the second quarter of next year”.

F1 said the track will be 5.41km long with high-speed straights which should allow top speeds of 320 kmh and “multiple overtaking opportunities”.

Dolphins chairman Tom Garfinkel, the managing partner of the Miami Grand Prix, said they had worked with specialist designers “to create a race track that we, Formula 1 and the FIA believe will provide great racing”.

Controlled since 2017 by the American group Liberty Media, F1 was planning on having a Miami GP in 2019 but hit a roadblock with the local authorities.

Initial plans to include a circuit that crossed a bridge over the city’s bay were shelved after objections.

Garfinkel commented: “The first priority was to create a great race track, and with the Hard Rock site we have a blank sheet of paper to put together a race track that is demanding in a lot of ways and to put on great experiences that are uniquely reflective of the diversity of Miami.

“America is such a big place that it always felt like we needed at least two races there to integrate with the audience,” the Mercedes driver said.

“The race can bring 4,000 jobs to communities in Miami. Montreal has always been my favourite to go to but Miami I think that’s going to be the favourite spot to go to,” added Hamilton, ahead of starting on pole for the Emilia Romagna Grand Prix at Imola later on Sunday.

Red Bull driver Max Verstappen, who finished second to Hamilton in the 2021 season’s opening race in Bahrain, said he was “excited” about the new GP.

“I’m sure if they build a good track, we can have a lot of fun out there and hopefully we’ll bring a lot of excitement so the fans can of course enjoy the race,” he said in a Red Bull statement.

His Mexican teammate Sergio Perez commented: “I think Miami is a great location for Formula One, it’s a very fun city and there’s lots of energy in that place.

“The Latino community is pretty big there so I’m definitely looking forward going there soon. I think Miami and F1 is the perfect combination.”

Miami joins Austin, which has hosted a Formula One Grand Prix since 2012, with this year’s race in Texas scheduled for Oct 24.

Miami’s arrival will give F1 a potent boost in its bid to compete with the more popular Indycar and Nascar circuits in the United States.

F1’s director of media rights Ian Holmes in February lauded the sport’s growth in popularity in the US, in part on the back of the Netflix F1 documentary series Drive To Survive.

Miami is the 11th venue in the US to host a leg of the F1 championship after Riverside, Sebring, Watkins Glen, Long Beach, Las Vegas, Detroit, Dallas, Phoenix, Indianapolis and Austin.