Michael Schumacher broke down in tears during press conference: ‘Ask another question’ 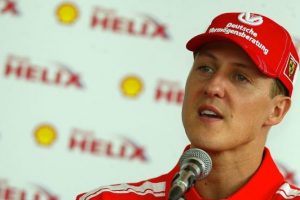 Michael Schumacher remains an icon of Formula 1, having seven world titles to his name. This record is only matched by Lewis Hamilton, who is gunning for his eighth world title this season. But one prominent Formula 1 figure hopes the Briton fails to achieve it. Felipe Massa, the Brazilian and former Ferrari driver, has said he hopes Red Bull’s Max Verstappen wins the title. He said this week: “He deserves it,” said the Brazilian. “It would be great to have another World Champion.

“Max would give anything to win. Even if it means he ends up in the gravel.

“He was always quick but not mentally ready. Now he’s much more mature and makes almost no mistakes.

“I would like Schumi to remain the record-holder with his seven World Champion titles.”

Schumacher had more tense moments with another Brazilian during his career – the legendary Ayrton Senna.

However, this rivalry ultimately ended in tragedy when, in 1994, Senna died after crashing out of a race at Imola in 1994.

As Senna rounded the high-speed Tamburello corner on lap 7, his car left the racing line at 191 mph, ran in a straight line off the track, and hit the concrete retaining wall at around 145 mph.

The crash happened as Schumacher was in pursuit behind – both men were in contention for the Drivers’ Championship.

The announcement of his death shocked the Formula 1 world, and Schumacher was still emotional about it when asked about Senna in a 2000 press conference.

He had just equalled Senna’s record for race wins at Monza.

In the press conference, Schumacher was asked by a reporter: This is your 41st victory, which puts you level with Ayrton Senna. Do those records mean a lot to you?”

Getting emotional, Schumacher broke down into tears, so the conference gave the German a chance to recompose himself.

Schumacher was then asked again why the record meant so much, to which he simply responded: “Ask me another question please”.

He said: “It is obvious why this win means so much, here in Italy. We have been in some difficulties in the last few races and now we are back on the road. It is my 41st victory and the crowd outside has just been amazing, much more so than when I won here in 1998. I don’t know why.”

In Netflix’s Schumacher documentary, they show an unearthed interview the German gave, opening up on how he responded to the news of Senna’s death.

He said: “It was two hours after the race where [engineering director] Mr [Tom] Walkinshaw came up to me after the race and said, ‘it’s looking very bad’.

“And then someone came to me later and said, ‘he’s dead’.

“I still didn’t believe he’d be dead, I couldn’t think of that. That point I was like, ‘no, he’s going to be the champion, he maybe misses one or two races and then comes back again’.

Felipe Massa on Michael Schumacher: ‘I know how he is’ [INSIGHT]

“The worst was really the two weeks after this as I had to accept he was dead.”

Schumacher was then asked whether it was “easy to drive” following the incident.

In his response, Schumacher admitted that he feared for his own life when racing again.

He said: “Silverstone, I went there [afterwards] and suddenly you see things with different eyes.

“I thought, ‘crazy, you always raced here but there are so many points you can crash and you can be immediately dead’ ‒ that was the only thing I was thinking of.

“I wasn’t sure can I drive without thinking that or I’m going to drive now always thinking, ‘now you can be dead here, if you go off here it’s going to be bad’ and that was something very strange.

“I wake up during the night and I’d sleep maybe three hours a night, things like this.”